China: Experts discuss the control of arms in international and domestic law

Beijing (ICRC) – A round table on "The control of arms in international and domestic law: Legal and Policy Considerations", co-organized by the International committee of the Red Cross (ICRC) and the China Arms Control and Disarmament Association (CACDA), takes place in Beijing today. Participants are from the Chinese government, arms industry as well as think tanks and research institutions active in the field of defence, disarmament and weapons control.

"We are concerned about the gap between the duty to ensure respect for IHL in arms transfers and the actual transfer practices of too many States," said Mr. Dominique Loye, Deputy Director of International Law and Policy Department, ICRC. "We are convinced that in addition to securing long-term gains in civilian protection and safer communities, responsible arms transfers will lay the foundation for regional and international peace, security and stability."

A study conducted by the ICRC in 1999 found out that the uncontrolled proliferation of arms and ammunition facilitates violations of IHL and other acts of wanton violence in violation of human rights law. It also leads to high levels of insecurity, which hampers humanitarian assistance, prolongs the duration of armed conflicts, and contributes to the persistence of armed violence and insecurity even after an armed conflict has ended. 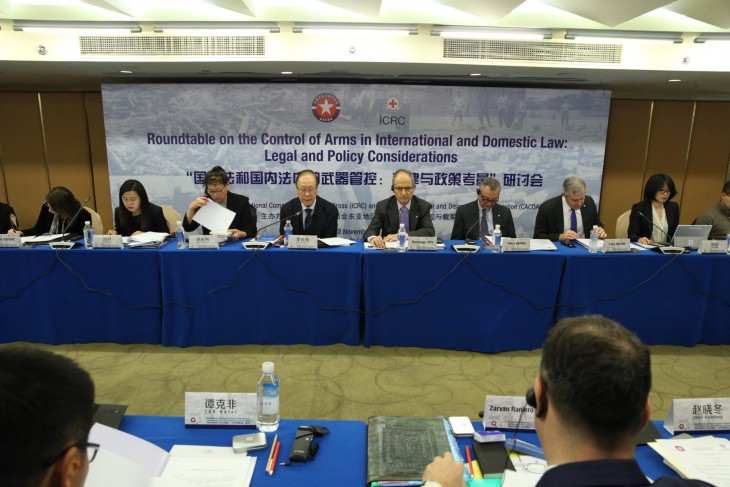 "Humanitarian concepts are one of the factors to push forward arms control and disarmament, and even the major driving force in some cases," said H.E. Ambassador Li Changhe, Senior Adviser of CACDA. "China attaches great importance to issues related to conventional weapons, and believes that the legal system on arms control should be consolidated and completed based on a balance between humanitarian concerns and military security in different countries."

"The ICRC stands ready to engage with State authorities and relevant organizations on these issues, and to assist them in their efforts to comply with IHL and other international obligations by providing technical assistance on how to best integrate them into domestic law and policy." said Pierre Dorbes, Head of the ICRC Delegation for East Asia.

The ICRC is an independent, neutral organization ensuring humanitarian protection and assistance for victims of armed conflict and other situations of violence. It takes action in response to emergencies and promotes respect for IHL and its implementation in national law.