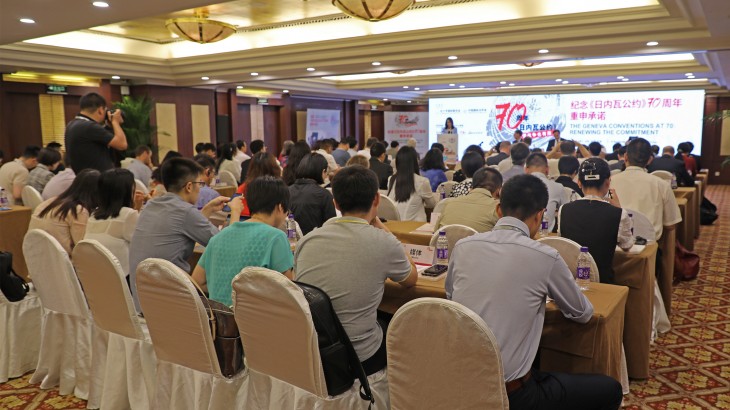 Beijing (ICRC) – A high-level international seminar started today in Beijing to mark the 70th anniversary of the Geneva Conventions, a set of rules that establish minimum standards of humanity that must be met in any situation of armed conflict. The Geneva Conventions restrict means and methods of warfare and seek to protect people who do not or are no longer taking part in the hostilities.

The two-day event, The Geneva Conventions at 70: Renewing the Commitment, organized by the International Committee of the Red Cross (ICRC) in cooperation with the Chinese Society of International Law (CSIL), has gathered over 100 participants. They include experts and scholars from the Chinese government, armed forces, the International Red Cross and Red Crescent Movement, diplomatic missions, think tanks, and academic institutions, etc.

"The four Geneva Conventions significantly increased the body of treaty law protecting the victims of armed conflict. That this was possible in 1949 is remarkable," said Mauro Arrigoni, member of the assembly of the ICRC. "All their provisions can be traced back to one fundamental consideration – even in armed conflicts, at the worst of times, the core of our common humanity must be preserved."

"It is crucial to take the opportunity to reflect upon the achievements and successes over the decades, while preparing the ground to undertake positive steps in relation to international humanitarian law (IHL) and its implementation in the future," said Jacques Pellet, head of the ICRC's regional delegation for East Asia. "The ICRC would like to continue its dialogue with China on IHL, and in particular, on the concrete steps that can be undertaken to further strengthen its implementation."

The Chinese government ratified the Geneva Conventions in 1956. In 2007, the National Committee on International Humanitarian Law was established in China for better coordination, promotion and implementation of IHL.

"As important global standards that govern humanitarian issues during armed conflicts, the four Geneva Conventions are the embodiment and the light of humanity in international rule of law," said Huang Jin, the president of CSIL. "The CSIL is willing to work with international humanitarian organizations such as the ICRC, as well as institutes and persons concerned, to build the platform for Chinese international law scholars, provide academic services, and advance the research and exchange on IHL in China."

The two-day seminar is expected to facilitate an exchange of views on a wide range of issues related to IHL and enhance the commitment to work on national legislation on specific topics. The meeting will also help prepare key stakeholders for the 33rd International Conference of the Red Cross and Red Crescent Movement at the end of the year, which offers another important venue for State Parties to discuss and decide on matters related to IHL and to strengthen its compliance.

The four Conventions, universally agreed upon in 1949, are a global commitment to a common humanity. Over the past 70 years, the Conventions have given comfort to thousands of prisoners of war and civilians, helped reunite millions of families, reduced displacement and contributed to the restoration of peace, among others.

For further information, please contact:
Michael Zhang, ICRC regional delegation for East Asia, Beijing, tel.: +86 138 1003 5522
To preview and download the latest ICRC video footage in broadcast quality, go to www.icrcvideonewsroom.org
To find out what the ICRC is doing to put an end to attacks on health workers and patients, go to
www.healthcareindanger.org
Follow the ICRC on facebook.com/icrc and twitter.com/icrc