Red Cross sees "many opportunities" to cooperate with China in Belt and Road Initiative: official 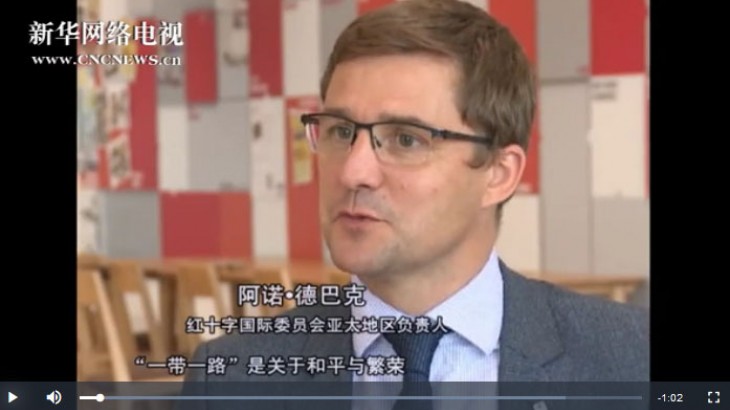 HONG KONG, Aug. 18 (Xinhua) -- There are "many opportunities" for China and the International Committee of the Red Cross (ICRC) to cooperate on the Belt and Road Initiative, based on shared humanitarian principles and the common goal for peace and prosperity, a regional official of the ICRC said Friday.

"The ICRC is present and active in 40 countries along the Belt and Road. We can find ways of cooperation for the benefits of people in these different countries," Arnaud de Baecque, deputy regional director for Asia and the Pacific of the ICRC, said in an interview with Xinhua.

Describing the Belt and Road Initiative as "a large project concerning so many countries and all about peace and prosperity", de Baecque said the ICRC and China have "many opportunities" to work together because of the same humanitarian principles, such as impartiality, neutrality and independence.

"China is more and more present in the field in many places with the ICRC, not only in Asia but also in Africa," he said.

"The dialogue we have on these different issues is a good way to keep the ball rolling between different aspects that are taken into consideration."

During his first visit to the Hong Kong Red Cross (HKRC) as a regional official of the ICRC, de Baecque gave a speech Thursday at the HKRC headquarters, talking about the humanitarian dimension of the Belt and Road, as well as the ICRC's engagement with China on the initiative.

"Of course the Belt and Road is about infrastructure, development and business opportunities' increase, but there is always a humanitarian component, because some of the countries are hosting populations that have humanitarian needs," he told Xinhua.

As for the ICRC's potential contribution to the Belt and Road, de Baecque said it can help with the stability of relevant countries through emergency humanitarian assistance to people affected by conflicts or violence on the one hand, and play a role in these countries' long-term development on the other hand, especially in areas with long-lasting conflicts where a development agency would not be able to enter and work.

"In many places with protracted conflicts, the ICRC used to have an immediate action during an emergency phase and then leave and let other players come to do the reconstruction or development work," he said, "Now we realize that we need to have a role which is partly emergency humanitarian work and partly development."