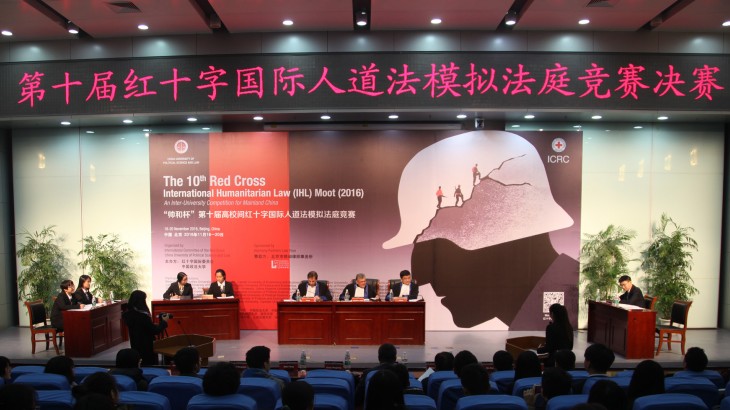 Beijing - The tenth edition of the international humanitarian law (IHL) moot competition- an inter-university competition on IHL -opens today in China University of Political Science and Law (CUPL) in Northern Beijing. Co-organized by the International Committee of the Red Cross (ICRC) and CUPL, the competition will run for 3 days and bring together 32 teams from institutes and universities across the country. The three finalist teams will be funded by the ICRC to participate in the 15th Asia-Pacific reginal IHL moot court competition in Hong Kong in 2017.

The ICRC has been organizing the IHL moot court competition on the Chinese mainland since 2007. The competition was held in Beijing for the first five years before being moved to cities like Wuhan, Shanghai, Jilin and Xiamen.

"As we have witnessed over the past 10 years, batches of young students have learnt about the IHL and the ICRC through the competition", said Guo Yang, Senior Political Advisor at ICRC Regional Delegation in Beijing. "Some of the previous competitors have joined the ICRC, while some others have widened their knowledge on international law and are now exploring or working in the field of the international rule of law. We are very pleased and encouraged by that."

More than 20 judges from national or international colleges and universities, think tanks, law firms, courts and relevant government departments have been invited to comment on participants' performance.

To find out what the ICRC is doing to put an end to attacks on health workers and patients, go to