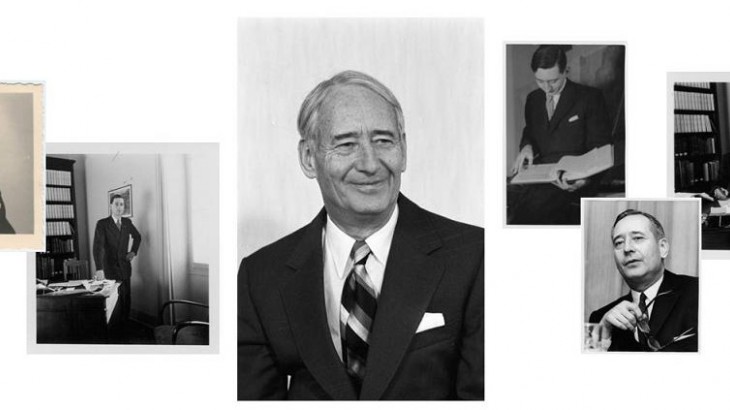 On the occasion of the 100th anniversary of the birth of Jean Pictet, the ICRC and the Committee for the Jean Pictet Competition (CCJP) paid tribute to Pictet’s legacy and achievements regarding the ICRC, international humanitarian law, the fundamental principles of the Red Cross/Red Crescent Movement and the competition that bears his name.

The event took place on 2 September 2014 at the ICRC Humanitarium in Geneva, and brought together numerous members of the humanitarian community.

Jean Pictet joined the ICRC in 1937 as a secretary-jurist tasked with preparing the revision of the 1929 Geneva Conventions. After the Second World War, as Director of the ICRC, he undertook the preparatory work leading to the adoption of the four Geneva Conventions  in 1949. He led the negotiations that resulted in the revision of the Statutes of the International Red Cross in 1952 and presided over the conferences of experts that negotiated the two 1977 protocols additional to the Geneva Conventions. He was a member of the ICRC Executive Committee from 1967 to 1979 and Vice-President from 1971 to 1979. But academics and international law students know him above all as the general editor of the four-volume Commentary on the 1949 Geneva Conventions and the 1977 Additional Protocols. 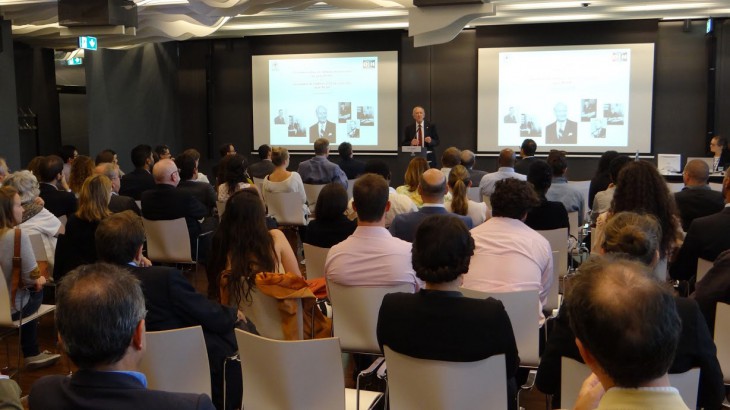 A podcast of the conference can be heard and/or downloaded here:

Presentation on the Legacy of Jean Pictet

Jean Pictet, the man (audio file in French)
Yves Sandoz (member of the ICRC Assembly), explained how Jean Pictet saved IHL, or at least revitalized it, through the drafting and adoption of the 1949 Geneva Conventions after IHL had been discredited by the horrors of the Second World War. Having known Jean Pictet personally and having worked alongside him, Yves Sandoz could give an insight into Pictet’s personality through a number of anecdotes. The audience discovered a humble man, dedicated to his work and to excellence, demanding of others, but even more demanding of himself.

The Legacy of Jean Pictet to IHL, fundamental principles and the ICRC (audio file in French)
Jean-Luc Blondel (head of the ICRC's Archives and Information Management Division) presented the work of Jean Pictet, who was ICRC president Max Huber’s right-hand man during the Second World War and after. He emphasized Pictet’s major contribution to the fundamental principles of the Red Cross and Red Crescent Movement through his PhD thesis. Thanks to his work, the Red Cross and Red Crescent Movement adopted the Fundamental Principles at its 20th International Conference in Vienna in 1965, and included them in its Statutes in 1986.

The Work of Jean Pictet on the Commentaries to the Geneva Conventions and their update:  from 1952 to 2014 (audio file in English)
Jean-Marie Henckaerts (head of the ICRC's Commentaries Update Unit) spoke of Jean Pictet’s legacy to IHL and its interpretation, emphasizing the continuing relevance of the Pictet Commentary on the 1949 Geneva Conventions. While the ICRC is currently revising and updating the commentaries to all the Conventions and Protocols, the original edition by Jean Pictet reveals both his understanding of IHL and his deep humanity and compassion for the victims of armed conflict.

Introduction to the Jean Pictet Competition, carrying on the legacy of Jean Pictet

Presentation and History of the Competition (audio file in French)
Christophe Lanord (CCJP member, co-founder of the Jean Pictet Competition, acting head of human resources at the International Federation of Red Cross and Red Crescent Societies) explained how Jean Pictet’s legacy has been kept alive by the annual Jean Pictet Competition, a role-play-based moot competition for law students that first took place in 1989. Over the last 25 years, the competition has brought together more than 2,700 students from some 90 countries. It has given them the opportunity to take IHL out of the books by immersing them in a fictitious case study, requiring them to adapt rapidly to a fast-changing situation.

Book launch: "A Tribute to Jean Pictet by the Jean-Pictet International Humanitarian Law Competition" (audio file in French)
Jean-François Quéguiner (CCJP member and head of the ICRC's Thematic Legal Advisers’ Unit), announced that CCJP members and former Jean Pictet Competition participants were preparing a compilation of essays in honour of Jean Pictet. The book would be published in 2015.

The Jean-Pictet Competition and the ICRC (audio file in English)
Étienne Kuster (adviser for ICRC relations with academic circles), presented insights into the ICRC’s support for the Jean Pictet Competition. He explained the influence the role-play competition model has had on other student competitions that the ICRC has held in other countries. Kuster went on to emphasize the use of fictitious case studies to address real humanitarian problems, and the role of influential individuals from each context acting as judges. In conclusion, he expressed the hope that the ICRC and the CCJP would continue their fruitful collaboration and keep the spirit of Jean Pictet alive in years to come.

Testimonies of Picteists (audio file in English)
Christopher Rassi (CCJP member and senior legal adviser at the International Federation of Red Cross and Red Crescent Societies) introduced various testimonies from Jean Pictet Competition Alumni, inviting participants to share experiences from the competition and explain how it had helped develop their interest in IHL and advance their careers.

At the end of the Commemoration, the CCJP and the ICRC announced that the 2015 Jean Pictet Competition would take place in Charlottesville, Virginia, USA.

The event was an opportunity to reflect on Jean Pictet’s accomplishments, but above all it was a chance to recognize the continuing relevance of those achievements in 2014, 100 years after his birth and 14 years after the death of one of the fathers of contemporary IHL.