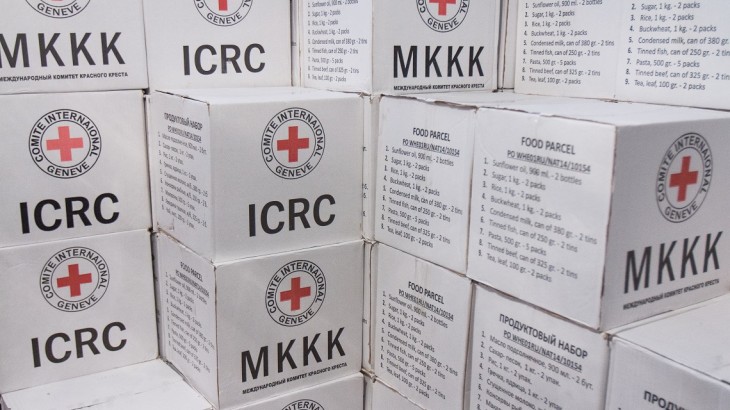 Many people had to flee their homes in connection with the conflict in Ukraine. The ICRC, in cooperation with local Red Cross branches and local authorities, is carrying out assistance programmes to help such displaced people. In this way, it complements the aid provided by local authorities and other organizations wherever a need arises.

In 2017, over 8,500 displaced people in Rostov oblast, Krasnodarsky Krai and Adygea Republic received food and essential items in six rounds of distributions. In total, the ICRC provided about 1,020 tonnes of food and items of hygiene. The ICRC delivered this assistance in collaboration with the local Russian Red Cross branches and local authorities. The ICRC food parcels contain buckwheat, pasta, sunflower oil, tea, sugar and other foodstuffs, while the hygiene kits consist of shampoo, soap, toothpaste and brushes, and other essential items.

About 10,000 vulnerable people displaced, due to the conflict in Ukraine, living in Crimea and Sevastopol, received food and essential items during the ten rounds of distribution in 2017. The ICRC provided about 2,100 tonnes of assistance. The ICRC delivered this assistance in collaboration with local Red Cross branches. It provided the same food supplies and hygiene items as in Southern Russia.

The ICRC has supported the Belarus National Society in implementation of the voucher distribution project, which allowed displaced Ukrainians to buy food and essential items. In 2017, about 4,500 vouchers were distributed.

In the second half of the year, the ICRC and the Belarus Red Cross started implementing a new assistance programme, which gave displaced families a possibility to start their own small businesses and not rely on humanitarian aid. Up to 200 grants for such projects are expected to be given to the people in the framework of this programme.

In all regions, covered by the Moscow Regional Delegation, the ICRC acts in cooperation with National Societies to help restore links between relatives separated by the conflict in Ukraine. In 2017, the ICRC received 11 requests from families who lost contact with their loved ones to help them trace their fates.