A conflict without borders continues to play out in the Sahel 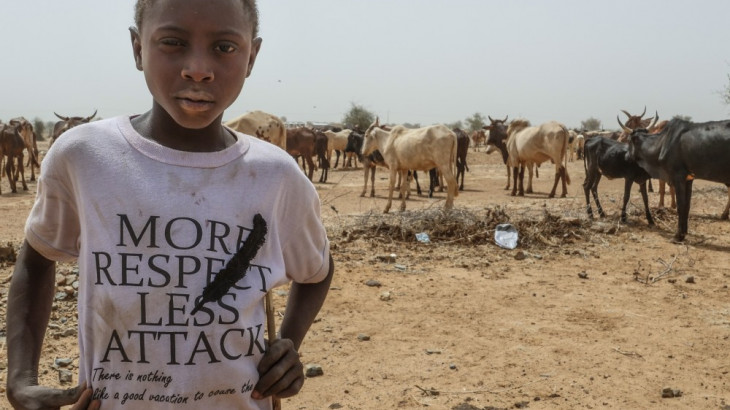 When the outbreak of COVID-19 led to a global ceasefire, the fighting in the Sahel region continued unabated. In the Liptako Gourma region, which straddles Burkina Faso, Mali and Niger, the security situation and humanitarian crisis have deteriorated significantly in recent months. The front lines are constantly changing, which means people are always on the move in search of safety.

Conflict is not the only danger they face; climate change and the COVID-19 pandemic are also affecting the lives of millions. Patrick Youssef, the ICRC's regional director for Africa, underlines the urgent need to help those people whose situation has become desperate, and to create a space that is conducive to development.

In the Sahel, armed violence, food shortages, the weak presence or complete absence of public authorities and the economic crisis have led to more than a million people being displaced, while others have decided to join armed groups.

In Burkina Faso, weapons confer power and are leading to unprecedented levels of violence. More than 900,000 people have fled the fighting, leaving behind their homes and livelihoods. People who have been arrested have gone missing, villages have been pillaged, and schools and hospitals destroyed. As compliance with international humanitarian law has been eroded, public authorities have faded into the background and basic services have been withdrawn. In the province of Oudalan, 29 health-care centres have closed, leaving nearly 300,000 people without access to primary health care. People's needs are huge, which is why we are supporting health-care centres in the most hard-to-reach areas and distributing aid and hygiene supplies to the most vulnerable people in detention centres and displacement camps.

Distributing humanitarian aid in conflict zones is a risky business and extremely complex in logistical terms, particularly as the region is so vast. As a neutral and impartial intermediary, we are negotiating our presence with all parties to the conflict – with national armed forces, international forces and non-state armed groups. We are reminding them of their legal obligations to respect – at all times and without discrimination – health-care staff and facilities, as well as human life and dignity.

Displaced people and their vulnerabilities

In Liptako Gourma, escalating violence is preventing people from moving about freely. Entire communities of herders and farmers cannot access land or pasture, thereby losing their main source of income.

This conflict without borders is playing out across the whole of the Sahel region. As the frontlines are constantly changing, many families have been forced to flee over and over again, and their vulnerabilities are multifaceted. Our concern is that these vulnerabilities are becoming irreversible; each time people are displaced, social cohesion fractures again and they are one step closer to not being able to survive.

Climate change is increasing people's vulnerability during the lean season. With limited natural resources and a volatile climate, characterized by high temperatures for most of the year and erratic rainfall, some countries are only just managing to maintain food and economic security.

The uncertainty created by climate change and the presence of armed groups is reducing the number of routes herders can use to move livestock. Herders now have to move their livestock much earlier in the year and for extended periods of time in order to find land for grazing. As for farmers, they are struggling to harvest enough cereals and vegetables. Competition for scant resources, poor economic prospects and ever-increasing demographic pressures are creating tensions between farmers and herders, which sometimes deteriorate into communal violence.

The COVID-19 pandemic is now a part of the equation and is also having a negative economic impact. We are concerned that people do not have access to the resources they need to survive this latest shock.

A security response is not enough

The Sahel region cannot count on political solutions to ease tensions and create a space that is conducive to development.

For the people who live in the region, the uncertain future is like a life sentence as they risk being trapped repeatedly by the conflict. "There is nothing worse for shepherds than to lose all their livestock and to have to rely on aid," explains Maina, a herder in Niger's Diffa Region.

Humanitarian action is the only way we can help people displaced by this crisis, but we will not be able to meet all their needs on our own, in the short-term or in the longer term. A security response is simply not enough – there also needs to be a drive for development to find a lasting solution to the crisis.

According to reports by the Armed Conflict Location & Event Data Project (ACLED), the number of violent incidents almost doubled in Mali, Burkina Faso and Niger between the last quarter of 2019 and the first quarter of 2020 (an increase from 402 to 709), in spite of the COVID-19 pandemic.