In the Democratic Republic of the Congo (DRC), war and other violence is the number-one reason that children become separated from their parents. "Conflict is devastating millions of lives in the Democratic Republic of the Congo," said Christine Cipolla, head of the ICRC delegation in the country. "More than 3 million people are displaced and utterly destitute, often with nothing to eat and without a roof over their heads.

Many children have become separated from their families and have no way of keeping in touch. More worrying still, some of them have been enlisted into armed groups." In August this year we chartered a flight to reunite 24 children, including 18 former armed group members, with their families back home in Nord-Kivu, Haut-Lomami, Tanganyika and Haut-Katanga provinces. 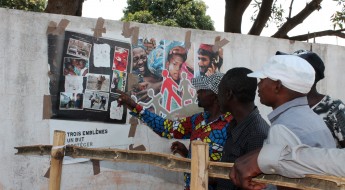 Angola: Reconnecting families displaced by armed violence in the Democratic Republic of the Congo (5)