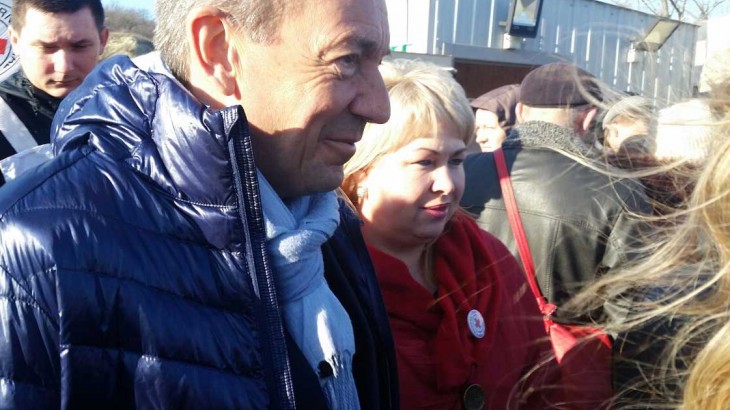 This week, ICRC president Peter Maurer is in Ukraine, his second visit to the country since the conflict broke out almost three years ago. In this diary, he will share some impressions of the people he has met and places he's been.

When I last came to Kiev, in February of 2015, I arrived in a very different city. That city was still getting to grips with the new reality of the armed conflict, which had broken out in the east the year before.

The battle for the town of Debaltsevo – one of the fiercest and bloodiest battles of the conflict since it began – had just come to an end, and civilians in the region were left reeling. It was also a time of intense diplomatic activity and negotiation: the second Minsk agreement had just been struck by the leaders of Ukraine, Russia, France and Germany.

For the ICRC, too, it was a time of intense pressure, to try to provide basic assistance to the displaced, the elderly, the sick and all the other vulnerable people living in severely straightened circumstances because of the conflict.

Today, we are still very much absorbed with providing basic services – only this week, for example, our teams have been bringing in emergency supplies of water to people in Avdiivka after the water supply was cut.

However, two years later, as people here have come to know us better, their expectations have increased – as they should. But what is especially striking is the way the ICRC's role as a neutral humanitarian intermediary, laid down in the Geneva Conventions, is now more widely recognized and solicited. This can take many forms. For example, in October, with the water supply to some 600,000 people under threat in the Lugansk region due to a lack of agreement between the sides, we exceptionally stepped in to pay electricity bills for a period of two months in order to resume the water supply to people had been cut off owing to unpaid electricity bills.

This is in addition to the basic services that our team – now comprised of some 500 people – works every day to provide.

When I last visited, candles were still lit in Kiev's streets and squares. Two years later, the candles are still there, but while the pain that they represent is less visible at first glance, it is no less deeply felt.

Instead, in almost every interaction I have had, what came out is the frustration that people feel, of being faced with an increasingly protracted conflict and no clear way out.

On the surface, life in the city resembles something close to normal once again. But in all my discussions with politicians, senior officials and our staff in Ukraine, it became clear just how deep a division the conflict has riven through society. No-one is left untouched.

Today I visited Mayorsk, a small village right at the front line.

There I met Svetlana, a nurse who runs the first aid point in the village. Every day, Svetlana walks four kilometers to work in Mayorsk and four kilometers back to her home in Zhovanka, another village.

The first aid point is housed in a disused kindergarten – there are very few children in Mayorsk now. 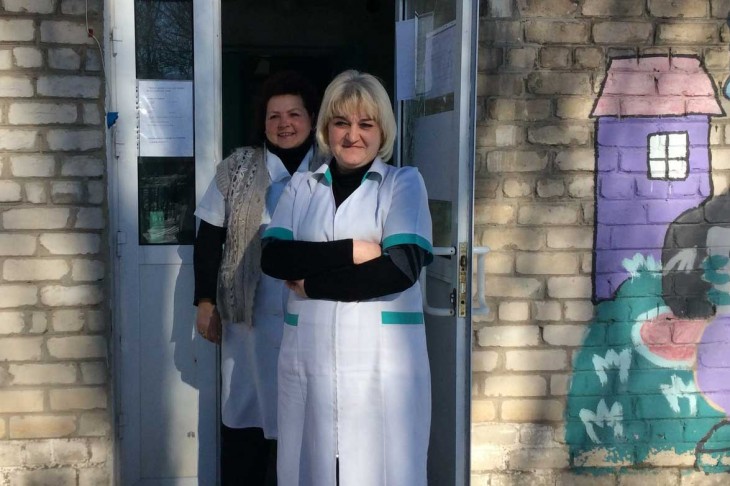 Svetlana and a colleague at the first aid point in Mayorsk

Most families with young children have fled. The villagers who remain are often elderly, sick, or disabled. Or they simply have no-where else to go.

Many of the elderly people here, have worked hard for their whole lives in the coal mines or steel industry that dominates the region. But their small pensions barely cover their basic needs, especially after prices rose sharply after the conflict started. As a result, they are highly dependent on aid provided by the ICRC and other organizations to make ends meet.

For the last three years, residents of Mayorsk have often heard the sound of shelling at night. No-one should have to endure that.

A sad start to the day. I visited the place where Laurent DuPasquier, an ICRC delegate, was killed when a shell fell right in front of our former office in October 2014. We laid flowers there and paid our respects at the small memorial. A reminder of the sacrifice that Laurent made, far from his family, his friends and his home in Switzerland.

It is international women's day today. Women's day – better known as simply the eighth of March - is serious affair in Ukraine, much more important than in Switzerland. Here, men give flowers to the women in their lives and try to offer a little appreciation for all that they do.

Our organisation derives great strength from its gifted women in the field: caring for the wounded, running food distributions, or repairing water supply lines. The dedication of the female staff I had the opportunity to talk with in Donetsk is really something. Many are local to the area and were driven to do something to help their community when the conflict broke out. 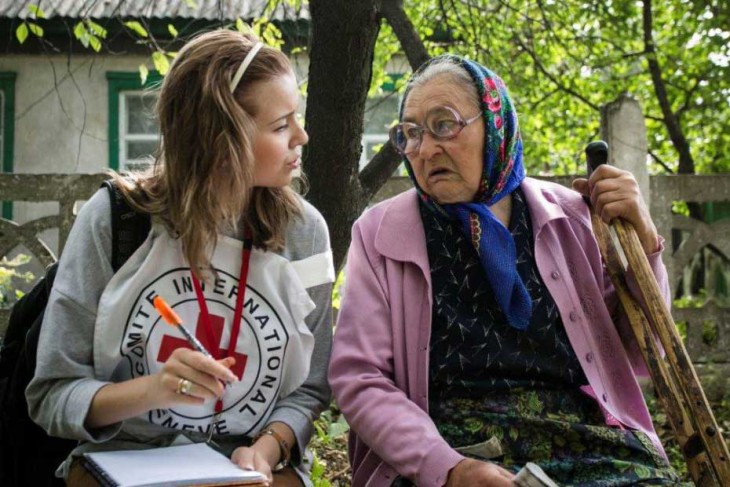 International Women's day is a serious affair in Ukraine. One of our female staff talks to an elderly woman

Later, I travelled to Nikishyno, a village which was right on the front line at the beginning of the conflict. Natalia Alexandrovna, a local official, told me that out of 800 people who lived in the village when the war started, there are just 207 now. The remainder fled to neighboring villages, or further afield, often to stay with relatives or friends in cities.

Another day, another defunct kindergarten. In this one, barely any furniture remained except for an upright piano, a reminder of more cheerful times. Children's books lay scattered and dirtied on the floor, right where they fell when the shells hit.

At one time, the basement of the kindergarten had served as a bomb shelter, over 60 people hiding in the darkness from the terror outside. 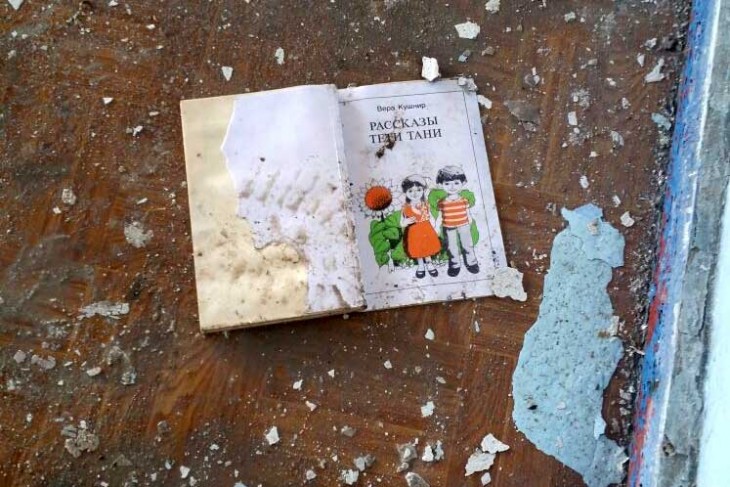 The destroyed kindergarden in Nikishyno

A colleague, Hakim Regragui, from our office in Donetsk, told me that we are planning to help rehabilitate this kindergarten, to be able to welcome children again one day.

There is only one place in the Lugansk region where civilians can cross from one side of the line of contact to the other - Stanitsa Luganska. The road bridge there before was destroyed in the fighting, so now people can only cross the expanse in between on foot, carrying their things. Today I did the same. 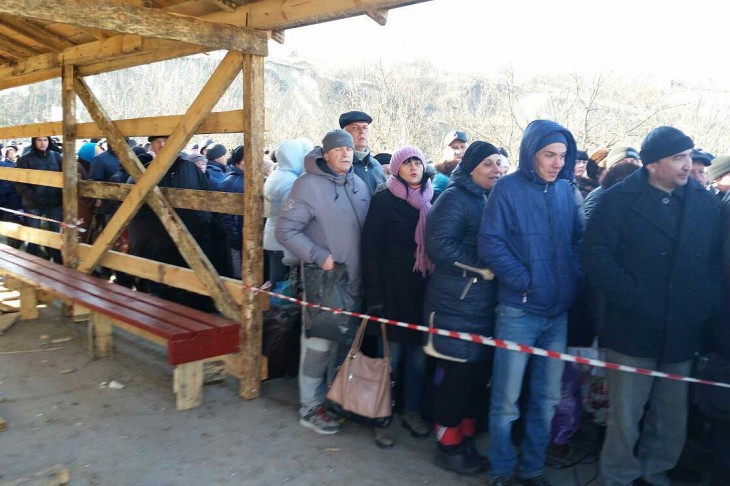 Sometimes, people have to queue at crossing points like this one for hours or even days, out in the open, exposed to the threat of shelling, shooting and landmines, alternately enduring freezing winter temperatures or summer heat.
There are a huge number of 'Stop, mine!' warning signs lining the fences.

We want to reduce the danger from mines at the crossing points. So we've installed toilets to avoid people straying from the road to relieve themselves in nearby bushes, unaware of the hidden danger.

On the way across, I dropped in to meet and say thank you to the Red Cross volunteers manning the warm shelters that the ICRC has set up on each side of the crossing point. The snow is thawing now, but in the depths of the winter, the volunteers told me that people were grateful to be able to drop in to get warm while nursing a hot cup of tea.

Warm shelters on both sides of the #StanitsaLuhanska crossing point provide the chance to take a break and get first aid. #Ukraine pic.twitter.com/z13dNeMl5y

Inside, I talked to a woman who told me she crosses at Stanitsa Luganska every day, to care for family members who live on the other side.

She told me how arduous it is to make the crossing every day. I can see that for myself. 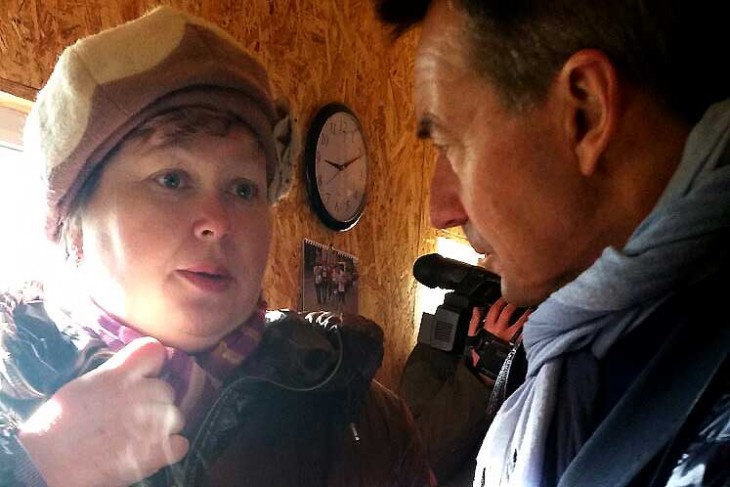