Diplomacy at the Service of Humanitarian Objectives

Reflections on the Humanitarian Project Plan on the Falkland/Malvinas Islands 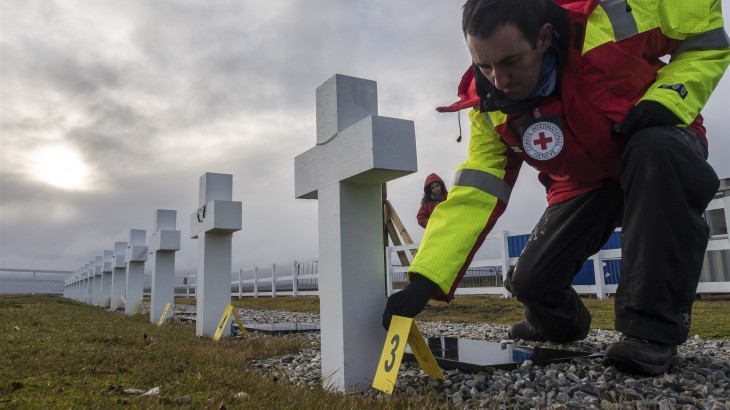 This comes nine months after the ICRC presented the Argentine and UK governments with its final report on the Humanitarian Project Plan.

Under that plan, the two countries had entrusted the ICRC with the task of identifying the remains of unidentified Argentine soldiers buried in Darwin cemetery on the Falkland/Malvinas Islands. The event will take place at the ICRC headquarters in Geneva, Switzerland.

The event will reflect on the factors that made the negotiations between the two governments a success, the importance of international humanitarian law, and the neutral, impartial role played by the ICRC in bringing answers to dozens of family members who had been waiting for years to find out where their loved ones were buried.

It will also be an opportunity to discuss best forensic practice as developed in the course of the project.

The Humanitarian Project Plan on the Falkland/Malvinas Islands was the first forensic initiative to be conducted under such a specific mandate conferred by two countries that had been engaged in an international armed conflict.

It all began in 2012, when the government of Argentina approached the ICRC to request its help as a neutral intermediary in identifying the Argentine soldiers.

The work in 2017 and 2018 was the culmination of diplomatic talks that began in 2016 and resulted in Argentina and the UK agreeing to task the ICRC with identifying the soldiers who died during the conflict and were buried in graves bearing the inscription "Soldado argentino solo conocido por Dios" (Argentine soldier known only unto God).

Of the 122 Argentine soldiers buried in Darwin cemetery, 103 have now been identified.

The objectives of initiatives like the Humanitarian Project Plan are provided for in the Geneva Conventions and are central to the ICRC's wider mission to prevent and resolve cases of people going missing in armed conflict.

In the case of Darwin cemetery, identifying the soldiers buried there fulfils the humanitarian purpose of bringing answers to the families of the missing.