Diplomacy in the service of humanitarian objectives: Falkland/Malvinas Islands 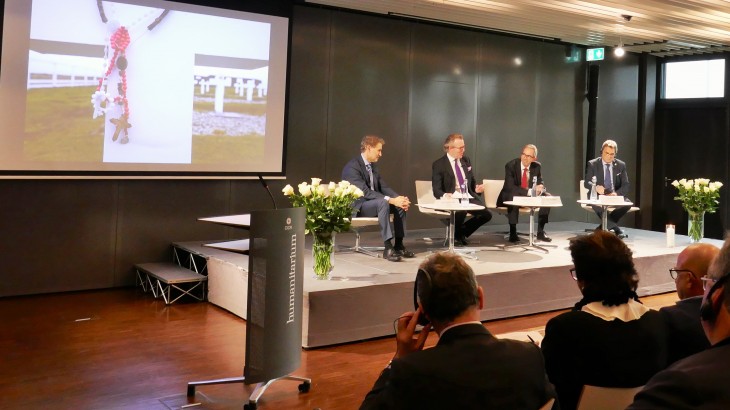 Geneva (ICRC) – “Diplomacy in the service of humanitarian objectives” was the title of a meeting held on Wednesday 21 November at ICRC headquarters in Geneva.

The aim was to present the best practices and lessons learned from the Humanitarian Project Plan (HPP) for the Falkland/Malvinas Islands. Hosts for the meeting were the International Committee of the Red Cross (ICRC) and the Argentine and British Permanent Missions to the United Nations. The meeting took place nine months after delivery of the HPP’s final report. So far, the HPP has identified the remains of 103 soldiers.

“The main aim of this work was to allow the families to grieve with dignity,” said ICRC operations director Dominik Stillhart, opening the event. In addition to the human aspect, Stillhart emphasized the importance of international humanitarian law and the diplomatic process related to the HPP. “The United Kingdom and Argentina worked together to define, develop and achieve a common humanitarian objective. I hope that other States will draw inspiration from their example,” he concluded, underlining the role of neutral intermediary that the ICRC had played.

The HPP – which was carried out at Darwin Cemetery on the Falkland/Malvinas Islands – is the first forensic project with a specific mandate from two States that had been on opposite sides in an armed conflict. The project took place in 2017 and 2018, and followed diplomatic negotiations that resulted in an agreement between Argentina and the United Kingdom, tasking the ICRC with identifying the soldiers who had died during the armed conflict and whose graves were marked “An Argentine soldier known unto God.”

The event included Argentina’s Secretary for Human Rights and Cultural Diversity, Claudio Avruj, the UK Permanent Representative in Geneva, Julian Braithwaite, former soldiers Geoffrey Cardozo and Julio Aro, the chair of the Families’ Committee, María Fernando Araujo, and Morris Tidball-Binz, who is in charge of the forensic aspects of the HPP. Argentina’s Permanent Representative to the UN, Carlos Foradori, was also present, as was Roberto Curilovic, representing Corporación América.

“One has to recognize that Argentina is grieving for its heroes and its families,” said Avruj, adding that it was time for answers. He saw the HPP as a “milestone in modern history” and an “example of the value of humanitarianism”.

Julian Braithwaite pointed out that the HPP was dealing with a sensitive humanitarian issue, and that the priority was to respond to the wishes of the families affected. He felt that the HPP was “a good example of how the ICRC and international humanitarian law can rise above politics to prioritize the needs of people affected by conflict,” adding that the ICRC had played a key role in enabling Argentina and the United Kingdom to work together.

Forensic specialist and member of the expert panel Mercedes Salado explained that her work went beyond simply getting forensic information to the soldiers’ families. She said that the project had carried an additional, very different meaning for her and the whole Argentine Forensic Anthropology Team. “We never thought that we would find them buried with respect and dignity, and with the clear intention of preserving them for the future. That touched me.”

Morris Tidball-Binz pointed out that “For each family, the last 36 years have been like walking around with a stone in your shoe. Now they can remove it.” He handed over stones from Darwin Cemetery to María Fernanda Araujo, chair of the Families’ Committee, for her to take back to the Committee’s offices.

Araujo’s brother was among those identified under the HPP, and she gave a moving account of her family’s experience. When their mother received the results confirming that her son had been buried with dignity, she said “I would like to kiss the hands that wrapped up my son. It doesn’t matter whether they were English, Scottish or Eskimo, the hands that wrapped my son were the hands of a human being. It was like giving birth again.”

Araujo said that at that moment, she finally understood. Her mother was referring to the work of Geoffrey Cardozo, who set up the cemetery in 1983, the year after the conflict.

Cardozo was also present, and talked about the experience of burying the Argentine soldiers. “It wasn’t me. It was the human being in me that made this possible,” he said. Julio Aro, who fought in the conflict on the Argentine side, saw Cardozo’s work as evidence of a humanitarian attitude.  “It’s a matter of putting yourself in the other person’s shoes. What we did was done with love, out of a desire to serve.”

Of the 122 Argentine soldiers buried in Darwin Cemetery who were included in the HPP, 103 have been identified so far.

The objectives of initiatives such as the Humanitarian Project Plan are provided for in the Geneva Conventions and are central to the ICRC’s efforts to prevent and resolve cases of people going missing during armed conflict.

In the case of Darwin Cemetery, locating tombs and identifying soldiers’ remains was aimed at achieving a humanitarian objective – bringing answers to their families.