Displacement in armed conflict debated at panel discussion in Amman 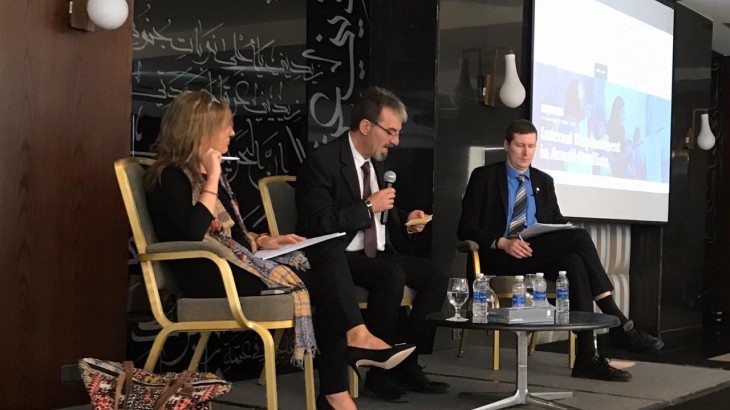 Amman (ICRC) – The International Committee of the Red Cross (ICRC) hosted a panel discussion in Amman, on 14 November 2019, to present the findings from two recent ICRC studies relating to the challenges raised by displacement in times of armed conflict in urban areas.

The first study, “Displacement in times of armed conflict”, aims todraw attention to the key role that international humanitarian law plays in preventing and addressing displacement, whereas the second study, “Displaced in Cities”, explores the experiences of people internally displaced in urban settings, outside camps, and their hosts.

At the event, Juerg Montani, the head of the ICRC delegation in Jordan, explained that internal displacement is one of the dramatic features of today’s armed conflicts. He said, "The humanitarian consequences of displacement are immense, in particular for populations facing protracted conflicts."

"In today’s conflicts, much of the displacement is to or within urban settings. It is therefore crucial to explore the role that cities play in mitigating or multiplying the risks that displaced populations face, and to critically examine the design of the humanitarian response to those displaced in cities," he added.

The discussion was facilitated by the ICRC Law and Policy researcher, Cédric Cotter, and the ICRC Global Adviser on Internal Displacement, Angela Cotroneo, with the participation of representatives of the humanitarian and diplomatic community based in Amman.

Montani asserted, "Jordan is an important hub for humanitarian multilateral dialogue and humanitarian diplomacy where diverse stakeholders can share their views on regional issues of concern." He added, "This is a timely opportunity to remind State parties to the Geneva Conventions, 70 years after their adoption, of their obligations and responsibilities, which include the prevention of displacement and protection of those internally displaced."