Drones, minefields, snipers and first aid: All in a week's work 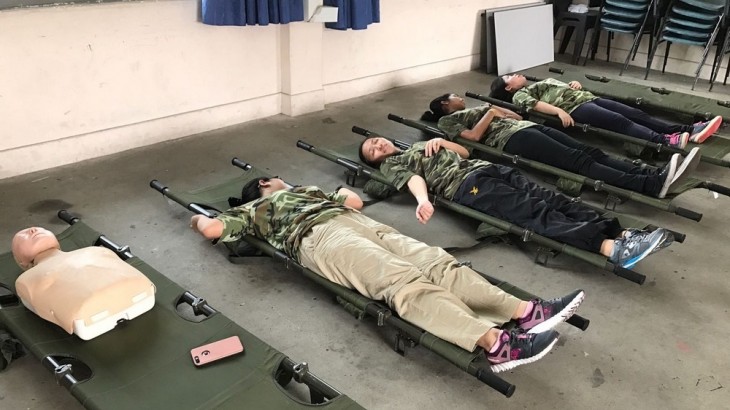 The joint week kicked off with a Humanitarian Dialogue on "The Advent of New Technologies of Warfare", where challenges to respecting IHL was discussed. Fifty-five guests discussed drones, cyber-attacks and IHL violations with two guest speakers, Kelisiana Thynne, Regional Legal Advisor for the ICRC and Dr Rohan Gunaratna, from the S. Rajaratnam School of International Studies (RSIS).

Singapore Red Cross staff and volunteers were also treated to an in-depth session on IHL, looking at the conflict in Syria and the efforts being done for those affected by the conflict there. While there were many questions about the work of the ICRC and attacks on health facilities, volunteers were also keen to learn more about increasing compliance of IHL on the ground, and how the ICRC and the Syrian Arab Red Crescent (SARC) worked together.

On the 24th and 25th of November, 18 youth aged between 15 and 18 were part of SRC's Youth Leadership Humanitarian Camp. "The camp aims to further develop leadership skills and capabilities of the youths, and to inculcate humanitarian values in them, so that they become humanitarian youth leaders of tomorrow," explained Head of Singapore Red Cross Academy (SRCA) Faiszah A. Hamid.

"We designed the camp with both theory and experiential learning. This way, the participants are exposed to simulated 'real-life challenges' that enhance the learning. We hope that this not only broadens their view, but also strengthens their leadership skills," Faiszah added.

Humanitarian Week 2016 ended with an experiential learning camp for adults, aimed at SRC donors and volunteers. Participants learnt more about the RCRC Movement through a series of simulation and teaching sessions. Participants underwent a mini EHL session, learned about the seven Fundamental Principles of the Movement and then had complete designated "missions" in the fictional country of Haddar that was under attack from its neighbour, Deldar following years of ongoing tension. Participants had to clear "mines" in a battlefield, negotiate with states, administer first aid and avoid snipers as they collected their daily rations.

"While it seemed like just a day of fun and games, participants had a small taste of what humanitarians go through daily, the potential dangers, risks and saw for themselves how IHL is practically applied in the field," said Faiszah.

"This one-day camp turned out to be a wonderful experience for me. I got the chance to play different roles in a situation of war and conflict. I've learnt that we must not only be physically prepared for such violence but mentally as well. Further, as a volunteer and member of the Movement, the lesson on the Fundamental Principles serves to remind me of the values that I need to uphold," said participant and Singapore Red Cross member,  Aubrey Arguelles.