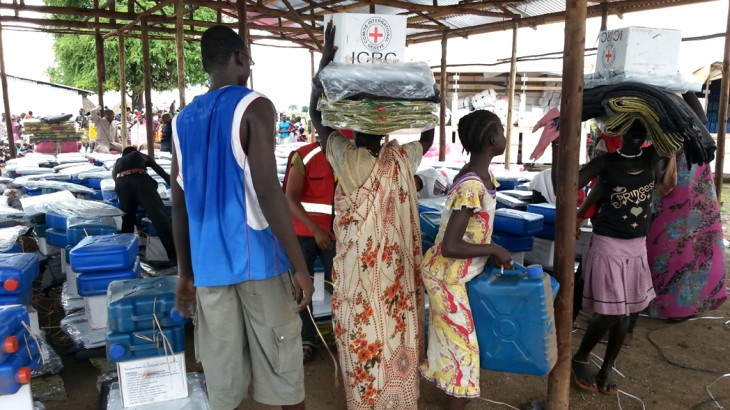 With the conflict in South Sudan prompting civilians to seek refuge in Ethiopia, and intercommunal violence generating internal displacement in different parts of the country, the ICRC and its partners have been moving quickly to bring aid to the people who need it most.

During the first half of 2014, the ICRC and its partners within the International Red Cross and Red Crescent Movement (the Ethiopian Red Cross Society, the International Federation of Red Cross and Red Crescent Societies, and the Swiss Red Cross) jointly provided emergency assistance to South Sudanese refugees at entry points and in refugee camps in Ethiopia's Gambella region. In addition, the ICRC and the Ethiopian Red Cross provided support for people displaced by intercommunal clashes in different parts of the country.

"Thanks to a prompt and coordinated response by all Movement partners in the country, our efforts to preserve the life and dignity of people suffering hardship have had a significant impact," said Ariane Tombet, head of the ICRC delegation in Ethiopia.

In order to help South Sudanese refugees, mostly women and children, newly arrived in Gambella region through several entry points along the border, the ICRC built five communal shelters between July and August at Pagak entry point and equipped them with blankets, kitchen sets and sleeping mats. In addition, together with the Ethiopian Red Cross, it distributed blankets, tarpaulins, kitchen sets, sleeping mats, jerrycans, energy-saving stoves and firewood to 15,600 particularly needy people in Leitchour camp. The ICRC further responded to the refugee crisis by building 200 emergency latrines in Leitchour camp and by delivering water by truck to Kule camp until July to meet the camp’s pressing water needs.

To reduce mortality rates among South Sudanese refugees, the ICRC and the Ethiopian Red Cross placed three vehicles on standby at the main entry points and camps in Gambella so that the sick, the wounded, pregnant women, elderly people and other refugees could if needed be taken to hospital quickly and also so that dead bodies could be transferred. Surgical equipment, other medical supplies and hygiene items were provided for Gambella Hospital and the Itang and Niengnieng health centres to enable them to better respond to the increasing demand for health care resulting from the influx of South Sudanese refugees. In addition, the regional blood bank was provided with supplies to make it operational.

Some 42,000 people displaced by intercommunal clashes in Moyale, Guji, Borena, Gambella and Benchi-Maji received blankets, tarpaulins, kitchen sets, sleeping mats and jerrycans provided by the ICRC and the Ethiopian Red Cross. Some 48,000 returnees in East Hararghe were given maize and sorghum seed and farm tools to help them earn a living again.

From January to September, the ICRC made regular visits to all federal prisons and to regional prisons in Amhara, Harari, Oromia, Tigray, Afar and Benishangul Gumuz to ensure that detainees, regardless of the reason for their arrest and detention, were treated with dignity and humanity, in accordance with international standards. It also visited the Mekele Regional Police Investigation Center in Tigray, and worked to improve access to health care for prisoners.

From January to September:

The ICRC and the Ethiopian Red Cross help family members dispersed by conflict, including Ethiopian and Eritrean civilians separated by the closed border, to exchange news. Refugees in Ethiopia and their families in their home countries receive similar help, as do Ethiopian returnees from Saudi Arabia and their relatives. Special attention is given to the situation of unaccompanied minors.

From January to September, the ICRC:

The ICRC continues to provide supplies and financial and technical support for seven physical rehabilitation centres to enable people with physical disabilities to regain mobility, lead their lives in dignity, and play an active role in society. This year, it helped set up physical rehabilitation centres in Assosa, Gambella and Nekempte which will provide services in western regions.

From January to September:

In cooperation with the Ethiopian Red Cross, the ICRC continues to spread knowledge of international humanitarian law among local and regional authorities, police, lawyers, academics, civil society and media personnel.

Returnee villagers in Mayu, Oromia region, being given seed and farm tools provided by the ICRC and the Ethiopian Red Cross.

A father (left) listening to his detained son’s message sent through the ICRC, Teletele, in the Borena zone of Oromia region.

Ethiopia, near the border with South Sudan. A refugee washing clothes at the entry point in Pagak camp.

A South Sudanese refugee collecting firewood and soap which will help her care for her five-month-old baby and three children.