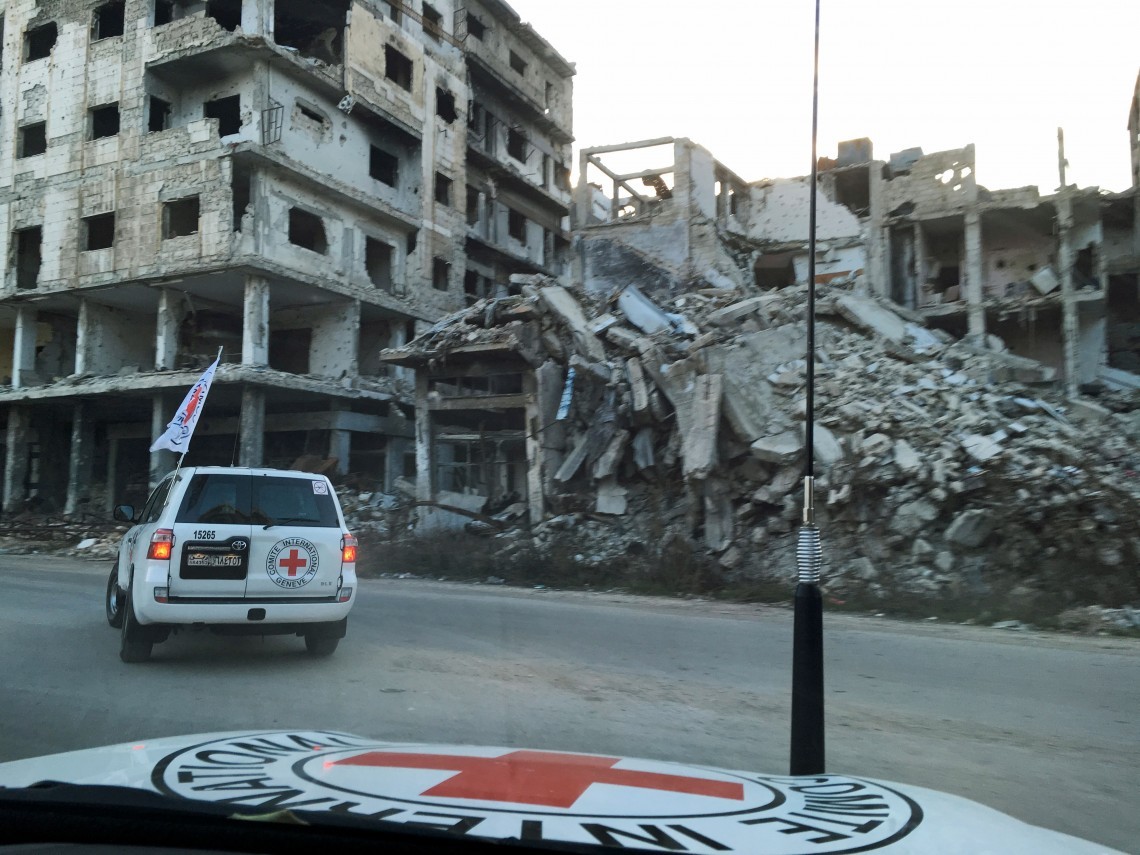 Idlib and Tripoli are currently enduring untold suffering and destruction from a hail of bombs and shells, joining a long list of cities before them – including most recently Mosul, Aleppo, Raqqa, Taiz, Donetsk, Fallujah and Sana'a.

They rarely make the top headlines, but they should. War in cities cannot be back-page news. In fact, some 50 million people are currently suffering its impacts.

Alarmed at the devastating humanitarian consequences of urban warfare, the International Committee of the Red Cross (ICRC) and the United Nations today are jointly appealing to States and all parties to armed conflict to avoid the use of explosive weapons with a wide impact area in populated areas.

As the world urbanizes, so does armed conflict. When cities are bombed and shelled – whether by airstrikes, rockets, artillery or improvised explosive devices – civilians overwhelmingly bear the brunt. In fact, the large majority of casualties – over 90 per cent, according to one estimate – are civilians. The harrowing images from population centres in Afghanistan, Iraq, Syria, and Ukraine – to name but a few – show a pattern of grave civilian harm impossible to ignore, yet too often forgotten.

Parties to conflict should recognize that they cannot fight in populated areas in the way they would in open battlefields. They must recognize that using explosive weapons with wide area effects in cities, towns, and refugee camps places civilians at high risk of indiscriminate harm.

Armed conflict in cities kills and gravely wounds countless civilians, leaving many with life-long disabilities and psychological trauma. Infrastructure necessary for the functioning of basic services – water, electricity, sanitation, health care – is damaged or destroyed. This triggers domino effects that exacerbate suffering. In one of countless examples, last month in Aden, Yemen, at least 200,000 people were left without clean water after intense fighting.

And when water or electricity is disrupted because supply lines have been blown up, providing healthcare becomes extremely difficult or impossible. Indeed, when cities are bombed and shelled, healthcare is also hard-hit: medical personnel are killed and injured, ambulances can't reach the wounded, and hospitals are irreparably damaged.

For those who survive, life becomes unbearable – and they are often forced to flee. This past summer, in two months alone, around 100,000 people were displaced due to heavy bombing and shelling in Tripoli. Displaced persons are particularly vulnerable to risks to their health and lives, especially women and children. In Iraq, 1.5 million internally displaced across the country are unable to go back home. Those who do, struggle to rebuild their lives against all odds; their homes have been destroyed, essential service networks have collapsed, and the threat of explosive remnants of war is everywhere.

The massive destruction caused by armed conflicts in cities can set development indexes back by years and even decades: for example, after the first four years of the armed conflict in Yemen, human development indicators dropped to their index of 20 years ago. This is a major setback to the achievement of many of the Sustainable Development Goals. Progress gained over decades can be quickly reversed as once lively and prospering population centres turn into ghost towns.
This year marks the 70th anniversary of the Geneva Conventions of 1949, universally accepted treaties which provide the protective power of international humanitarian law (IHL) when its rules are scrupulously respected. IHL absolutely prohibits directing attacks against civilians or civilian objects, indiscriminate or disproportionate attacks, indiscriminate weapons, and using civilians as human shields. It requires conflict parties to take steps to minimize incidental civilian harm. Respect for these rules is all the more critical when armed conflict is waged in populated environments – where military targets and civilians and civilian structures are comingled, and civilians are at great risk of harm.

The inherent vulnerability of civilians in populated areas make it imperative for States to reassess and adapt their choice of weapons and tactics to avoid civilian harm, and to adequately prepare, train and equip their armed forces for this purpose. States must also exercise influence over their partners and other supported conflict parties to this end. And it is imperative that the protection of civilians is made a strategic priority in the planning and conduct of military operations. Some steps are being taken in this direction, but much more needs to be done, and soon.

We are encouraged that a number of initiatives for strengthening civilian protection in urban armed conflict are under way. As a first step, we support the efforts of States to develop a political declaration, as well as appropriate limitations, common standards and operational policies in conformity with IHL relating to the use of explosive weapons in populated areas.

We further urge States and other stakeholders to strengthen the collection of data on civilian casualties and to establish mechanisms to mitigate and investigate harm to civilians, ensure accountability and draw lessons for future operations.

We encourage States to identify and share good practices for mitigating the risk of civilian harm in urban armed conflict, including restrictions and limitations on the use of heavy explosive weapons in populated areas, and we undertake to support such good practice exchanges.

We call on all parties to armed conflicts to employ strategies and tactics that take combat outside populated areas to try to reduce urban fighting altogether, and we urge parties to allow civilians to leave besieged areas.

And we appeal to States to adopt policies and practices that will enhance the protection of civilians when warfare takes place in populated areas, including policies and practices to avoid the use of explosive weapons with a wide impact area, due to the significant likelihood of indiscriminate effects. This will go a long way to mitigate the impact of war on cities and to reduce suffering.