FMR Volunteers – Lifeline to community based disaster response in J&K 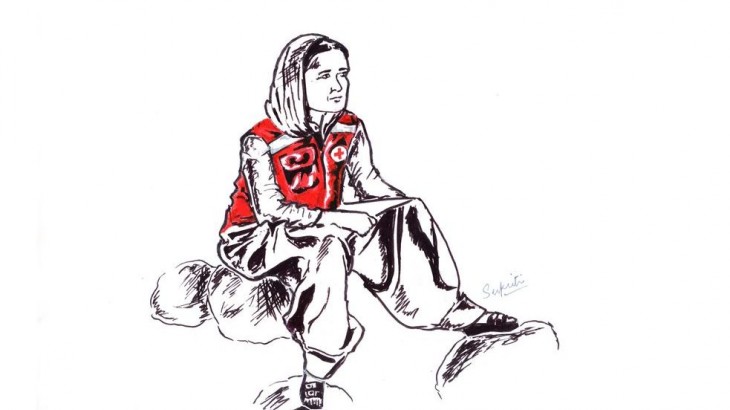 Hasina Gatoo is an inspiration to many in her community. Sukriti Bhatia/ICRC

As monsoon sets in, the threat of floods looms large over many parts of South Asia, including India. Heavy downpours often result in some damage to homes, roads, bridges and power lines with attendant threats to residents. A long standing volunteer in Jammu & Kashmir, Hasina Gatoo, has been working as a First Medical Responder (FMR) since 2013. A memorable experience for her was the role she played in assisting those affected by the floods in 2014 – a disaster which killed many hundreds and caused massive destruction.

Dressed in a traditional Kashmiri feran, her calm eyes speak volumes. Forty-six-year-old Hasina who hails from Shopian in South Kashmir is an inspiration to many in her community, as she has been part of many disaster response teams.

Recalling her experiences of the flood response, she says, "I clearly remember the day when our village was inundated. We received the first call for help from the adjoining village of Dachipora, where the water from the nearby river had flooded into some houses. People were forced out and that's when we contacted the local District Commissioner seeking relief material. Everything happened so quickly."

As a trained FMR volunteer, she was part of the team deployed to provide first aid, and undertake search and rescue efforts during the disaster. Hasina's story stands out more so because often when she is a part of an emergency response team, her male volunteers advise her to stay safe and not venture out. But wearing the advice on her sleeves, she would be often be seen helping others during rescue operations in her village, very much riding the self-made rafts with her male volunteers.

She recalled one particular heart wrenching experience. "Of the many people we rescued, there was one pregnant woman in Dachipora village. I can't explain how relived that lady was after seeing another woman come to her aid. I quickly covered her in blankets and brought her out safely to the make shift hospital". Hasina is also one of those who not only inspire other ladies in the village through her action, but also encourage them to contribute to the social good.

The FMR is a unique programme of the Indian Red Cross Society (IRCS) whose pilot programme was launched in Uttarakhand in 2011 and has subsequently been extended to 18 most disaster prone states of the country. It was launched in Jammu and Kashmir in 2013 and at present, the IRCS J&K Branch has more than 1500 trained FMR volunteers. In the course of the 2014 Kashmir floods, these FMR volunteers played a major role in rescue and evacuation operations. As J&K is a disaster prone area, these volunteers are also among the first responders to provide first aid to the victims of road traffic accidents.

Hasina is appreciative of the capacity-building initiatives of the Red Cross which ensures that volunteers are constantly prepared so they could effectively respond to disasters in their communities. Indeed, the success of Red Cross programmes is hinged on the persistent and unrelenting efforts of volunteers such as Hasina. Ms. Roma Wani, the IRCS J&K State Secretary, acknowledges that women play an important role in disaster response. According to her "...as a woman myself, I think that female volunteers are a strength of the J&K IRCS State Branch as they are most sensitive to the needs of the community."

The ICRC has supported the IRCS J&K Branch to train more than 400 such FMRs across the state who have been instrumental in mobilising other volunteers from the community to help in rescue operations. Besides direct rescue and relief, the Red Cross teams are actively involved in helping to identify and deploy community resources and support to mitigate the lack of essential services during disasters.