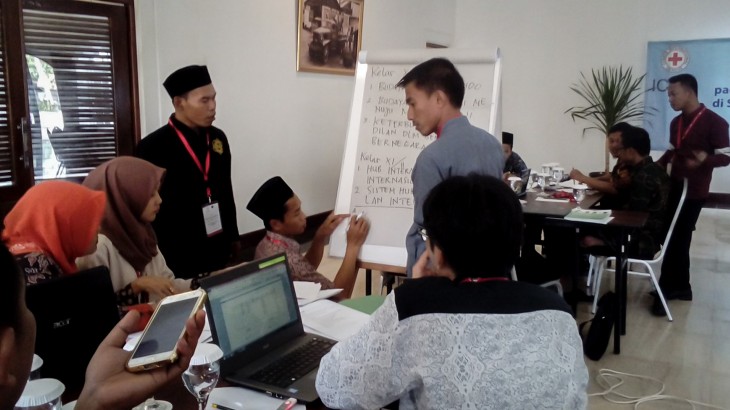 Education is the most powerful weapon which you can use to change the world, said the late Nelson Mandela. It is with this premise in mind that the ICRC Global Affairs team in Jakarta has been steadily building relationships with some of Indonesia's leading Islamic universities and "pesantren" (Islamic boarding schools).

At the heart of the flourishing relationship is "Akhlak Kemanusiaan" (AK), a modified version of the ICRC's Exploring Humanitarian Law (EHL), a teaching resource pack for teachers to introduce students between ages 13 and 18 to the basic rules of international humanitarian law (IHL). In late September, a team from the ICRC Jakarta jointly organized a workshop with the Nadhlatul Ulama Islamic Institute (IAINU), a leading university in the city of Kebumen, Central Java, with the aim of exploring how AK modules could be incorporated into existing or future teachings plans.

"There has been a lot of interest from both high school teachers and lecturers about the ICRC's AK teaching modules," said ICRC's Francisco Nggadas, adding that AK translates as humanitarian ethics or principles. "The challenge now is to work out how our modules can fit in with both existing teaching plans and with each particular class of students."

The two-day workshop brought together over 20 educational practitioners, the majority staff from local IAINU and SMK Ma'arif high schools run by the Nadhltaul Ulama (NU), one of the world's largest Islamic organizations with over 40 million members across Indonesia. "Ustadz" (religious teachers) from Islamic schools and leading universities in Yogyakarta, Aceh, Bogor and Palu also travelled to Kebumen to be a part of the discussions.

"It was really encouraging to see so much enthusiasm for the AK teaching modules," said Jessica Sallabank, an ICRC delegate. "It was also useful to understand the extent to which humanitarian ethics, principles and 'gotong royong' (communal work) already feature strongly in both Islamic teachings and within the classes being taught," she added. "The next step is to define the ICRC's further value addition to this, and work with the teachers who want add an additional IHL / AK component into their lessons."

The AK learning materials, which provide 10 hours of activities, are based on real-life situations and show how IHL aims to protect life and human dignity during armed conflict and prevent and reduce the suffering and devastation caused by war.

Dr H. Mahrur Adam Maulana, the deputy rector at IAINU, said the course provided "a good introduction to the rules and complexities of IHL" and stressed that it could play an important role in influencing the behaviour and thinking of students should they ever find themselves as "bystanders" in a humanitarian emergency.

"There is interest in it but the challenge now is to tackle the practicalities," said the ICRC's Francisco Nggadas at the close of the event. "Issues such as time and resources, and competition with other subjects are a real challenge for teaching staff. We also want AK to be a sustainable programme, not just a one-off."

In his closing remarks, IAINU Rector Dr Imam Satibi said he hoped the ICRC would continue to work with the teaching community in Kebumen, adding he would like to see AK develop into one of the flagship teaching subjects at the institute.

To read more about the event in Bahasa Indonesia, click here