Georgia: Remains of 13 people, considered missing due to 1992-1993 conflict, identified 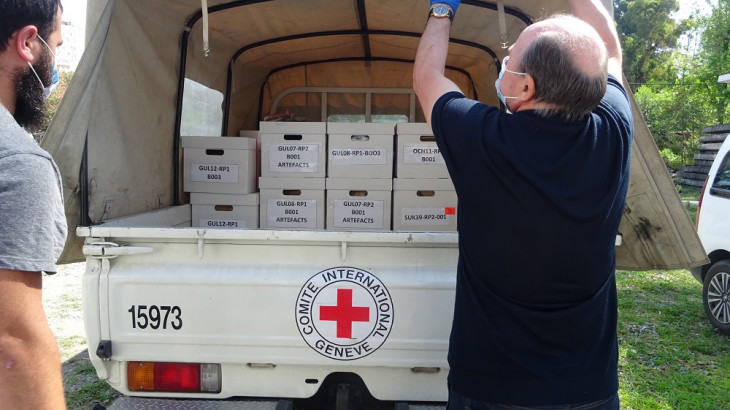 The identified remains are prepared for transportation to Tbilisi from Sukhum/i morgue. Valeska Martinez LEMUS/ICRC

Tbilisi (ICRC) – The family members of 13 people unaccounted for in connection with the 1992-1993 armed conflict in Abkhazia have been informed that their loved ones were identified by the International Committee of the Red Cross (ICRC).

This was made possible within the framework of the Coordination Mechanism on Persons Unaccounted for in Connection with the 1992-1993 conflict in Abkhazia, which has operated under the auspices of the ICRC since 2010 and involves both Abkhaz and Georgian participants. The mechanism is of a purely humanitarian nature and acts on behalf of the families of missing persons.

The remains of these 13 individuals were recovered during excavations carried out under the lead of the ICRC in 2017 and 2018 in Sukhum/i, Gulripsh/i, Ochamchire/a, and Mtskheta districts. In line with international standards of best practice, identifications were concluded by the ICRC through a multidisciplinary, scientific process.

The State Ministry for Reconciliation and Civic Equality of Georgia (SMR) notified the families about the identification of their loved ones. The handover of the remains to the families will take place at the Samkharauli National Forensic Bureau (NFB) on 14 August 2020.

The families will be able to meet representatives of the SMR, the NFB, and the ICRC, and receive information about the steps that led to clarifying the fate and whereabouts of their missing relatives. The families will also continue to receive psychological and psychosocial support throughout the process, to help them cope with the emotional impact that identification of their deceased loved one can have on them.

The farewell ceremony will take place on 15 August 2020 at Sameba Holy Trinity Cathedral.

"Despite obstacles generated by the COVID-19 crisis, we at the ICRC deployed all efforts so that the identification of missing persons progresses," said Jerome Thuet, the ICRC's missing programme coordinator.

"Local and international specialists in the fields of genetics, archeology, and anthropology continued to analyze and reconcile all available data, producing some concrete results," Thuet added. "This activity is of utmost importance, as the families of missing persons have the need and the right to know the fate and whereabouts of their relatives. Over the past few days, 13 families have received answers. They will thus be able to end the ambiguity they have been living in and pay tribute to their deceased family members."

In total, 2,352 people, including military and civilians, are still reported as missing in connection with the conflicts of 1990s and August 2008.

Since 2013, remains of up to 563 persons have been recovered, out of which 191 have been identified and handed over to their families. The work continues to clarify the fate and whereabouts of other missing persons from the conflict.