Georgia/Abkhazia: Homecoming for the missing, closure for their loved ones 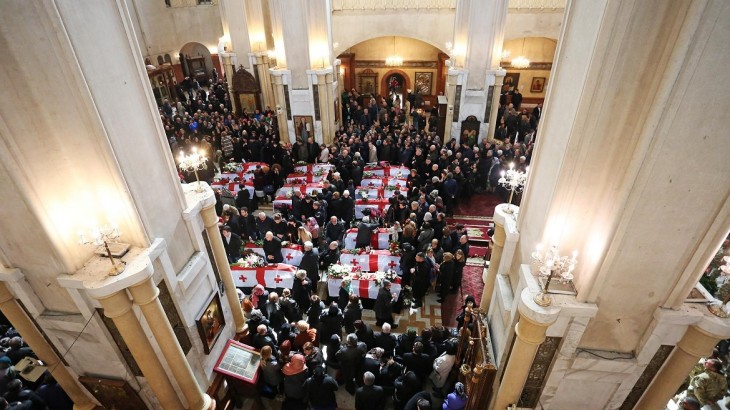 "It has been 24 years of sheer hell for my family. The first few years after he went missing, we did not know if my father was alive or dead. Once we heard about his death, we did not know where he was buried. It's taken almost a quarter of a century to finally get some closure... the darkness of not knowing has been lifted."

As Vladimer Gabeskiria talks about his father Guram Gabeskiria, one of the thousands who went missing in connection with the 1992–93 armed conflict in Abkhazia, it's hard to miss the bittersweet look of relief on his face. The remains of his father, along with those of 24 others who were missing, were handed over to their families on 17 October 2017.

For all these families, this long painful journey of uncertainty had put everything else on hold. Once they knew that their loved ones had passed away, the anguish of not being able to say a proper goodbye made it difficult for them to move on. Now, with the mortal remains being handed over to them, their despair has finally given way to acceptance, and even satisfaction of being able to visit them at their grave.

"When the ICRC first approached us, we were not confident that they would be able to get any information about my father," says Rusudan Partsvania. Her father Alexandre Partsvania too had been missing. "We could not imagine how it might be technically possible to find, identify and return a person to his family after so long. But when we heard that they had found his remains, it's as if these 24 years suddenly disappeared. It was pure relief," Rusudan adds.

The identification of these 25 people also gives hope to hundreds of other Georgian, Abkhaz and South Ossetian families who are still waiting to hear about their missing loved ones.

"Everything is possible if there is enough data and information. Regardless of how painful it might be, we all need to recall even the smallest detail and share it with the ICRC. I did not have hope initially... but I have my father back after a quarter of a century. So anything is possible," reiterates Irakli Alasania, son of Mamia Alasania, whose remains were among those recently handed over to families.

"Our efforts and work have ended over two decades of uncertainty for nearly a hundred families. But many more still await the answers," says Biljana Milosevic, the head of the ICRC delegation in Georgia. "We at the ICRC are committed to the humanitarian efforts for the fulfilment of families' 'Right to Know', regardless of who they are and where they come from."

Reliable information about missing people and potential burial sites is key for achieving success in clarifying their fate. Any information received by the ICRC, including personal information of the sources, is treated confidentially and used for humanitarian purposes only.

The 25 individuals were positively identified using a multidisciplinary approach drawing on the ICRC forensic expertise and extensive financial support. Since the Coordination Mechanism on Missing Persons was first set up in 2010 under the mediation of the ICRC, the remains of 325 people who went missing in connection with the 1992–93 conflict in Abkhazia have been recovered, and managed with dignity by skilled staff. Of those, 126 (including these last 25) have been identified and returned to their families.

Extensive efforts are on to identify as many of the others as possible.