Even wars have limits: Health-care workers and facilities must be protected

Speech given by Mr Peter Maurer, president of the ICRC, at the United Nations Security Council Briefing, 3 May 2016, New York, USA

Even wars have limits, because wars without limits are wars without ends. Health-care personnel and facilities are the outer frontier of these limits. 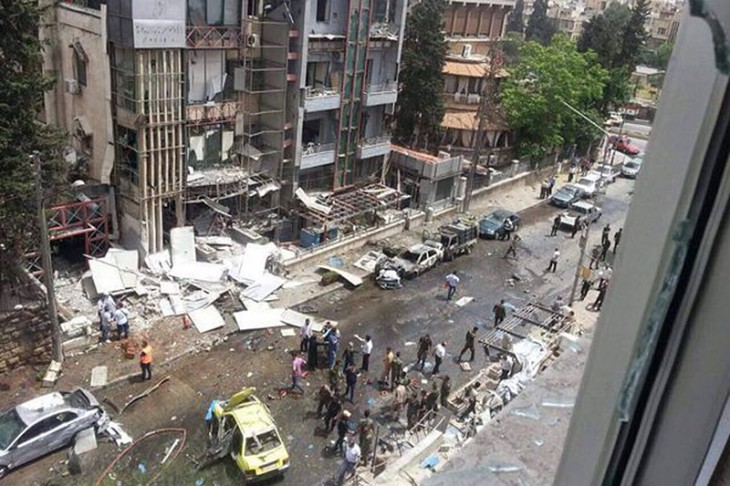 A couple of months ago, I stood in front of a four-story building.

It was really more a shell of a building, completely bombed out, burned out, ripped apart, steel cables sticking out from the load-bearing walls, rubble all around.

The only indication that this once used to be a hospital was a surgical lamp, miraculously still attached to the ceiling of the second floor.

I was in Syria, but I could just as well have been in Afghanistan, in South Sudan, or in Yemen.

It's a painful paradox that in times of greatest need, the availability of health care is at its lowest.

In a war, people are injured, malnourished and sick. Yet the greater the need for medical treatment, the more difficult it is to obtain such treatment, because the few places and people that can help, come under attack.

The ICRC found that within three years, 2,400 attacks against patients, health personnel, facilities and transports occurred in 11 conflict-affected countries. That's more than two attacks per day, every day, for three years. And it is only 11 countries we were looking at.

Last year, the World Health Organization announced that 60% of health-care facilities in Syria had been damaged or destroyed, while 25,000 people were wounded every month.

In Yemen, the ERC Stephen O'Brien said, that after a year of fighting, one quarter of the country's health services had been destroyed or shut down.

In Afghanistan, in 2015, the ICRC recorded a 50% increase in incidents against health staff and facilities, compared to the previous year. That means one incident every three days, without considering how many incidents go unreported.

Not always, but far too often, these incidents, attacks and destruction, constitute outright violations of international humanitarian law.

As wars and armed conflicts have evolved from open battlefields to urban areas, and from pistols to mass shelling and bombardment by air forces, the wounded and sick are no longer just those in uniform.

The wounded and sick now include Ramish, who was nine years old when he stepped on a mine in Afghanistan. They include Mathilde, who was raped by fighters while she was harvesting her fields together with her husband in the Democratic Republic of the Congo. They included the wife of Khaled, in Syria, who died during childbirth because there was no midwife or doctor to tend to her. And they include all the nameless patients in the hospital I mentioned at the beginning.

These are just a few examples of the human beings, and their stories, that the staff and volunteers of the International Red Cross and Red Crescent Movement are confronted with in the field, every day, around the world.

They show the impact of war on people, but more importantly, they show that medical treatment and health care at large are crucial in times of war.

International humanitarian law therefore specifically protects medical personnel, facilities and transports, precisely because they are indispensable in times of war. Not doing so risks multiplying the impact on health systems, which in turn risk unravelling with an impact far beyond the region concerned, a burden on future generations.

Attacking a hospital, threatening a doctor, coercing a nurse to give preferential treatment to armed fighters, hijacking ambulances, using patients as human shields – these are not examples of collateral damage. These are not sad realities that we have to get used to.

They are abominations and trends that must be fought.

When an MSF hospital in Yemen's Saada province was destroyed in October 2015, it meant that 200,000 people instantly lost access to vital medical care.

Five years into the war in Syria, the entire city of Rastan has one dentist left – for 120,000 people.

Today, the reality in too many war-torn countries is that if you don't die of shelling or fighting, you die because there is no dialysis equipment, no antiobiotics, no medicine for diabetes and heart disease.

Death rates by communicable and non-communicable diseases often surpass death rates by weapons. This, for us humanitarians, is an indicator that we are not confronted with mere temporary disruptions but with system disintegration. It is not just a hospital or a doctor that has been affected: entire health systems unravel under the attacks on health facilities and personnel.

The medical sector – alongside water, power, and education infrastructure – is often the first in line to collapse under the cumulative impact of warfare, particularly in urban areas. Where a lot of people live closely together and depend on infrastructure and public services that are all intertwined, the effects of attacks and destruction are greatest.

The ICRC, in a recent study, summarized the experience of the successive disintegration of urban services for people in today's conflicts. What we see from the study is that humanitarian assistance is always insufficient to cope with the progressive dismantling of social services over time; what is needed is a fundamental change in behaviour in warfare.

The humanitarian consequences of the cumulative impact that results, when essential infrastructure – like hospitals – is annihilated, must be taken into account when balancing military necessity against the protection of civilians.

It is not true that the guiding principles of the conduct of hostilities in warfare are wrong or outdated: rather, they need to be interpreted differently in today's environment. Much more weight has to be given to the impact on civilians and their protection in order to counter the decade-long trend in which civilians bear the brunt of armed conflict or even become the very objective of attacks.

Beyond the immediate, when attacks and destruction of health infrastructure occur, efforts to reduce child mortality, improve maternal health and fight against diseases such as polio are wiped out in a matter of seconds. Rebuilding what has been destroyed will take years, if not decades. International humanitarian law and humanitarian action play a critical role as guarantors for developmental progress. If they are violated and prevented, this function unravels, and health-care services are particularly vulnerable.

I want to commend this Council for passing Resolution S/2016/380 today. I know from my own experience as the Swiss representative to the UN, that every word – every comma actually – has been carefully weighed and negotiated.

And the result is strong: in clear language, you underline the importance of international humanitarian law, you call on States and all parties to armed conflict to comply with their obligations and develop effective measures to protect people's lives by preventing and addressing violence against medical personnel, facilities and transports, and humanitarian personnel exclusively engaged in medical duties.

This resolution marks a momentous step in the international community's efforts to draw attention to a problem that we otherwise risk getting used to through the sheer frequency of its occurrence.

We have not yet been desensitized by these attacks, because we are still outraged after every attack.

But after outrage must come action, not complacency.

So while this resolution is an important step, it must not mark the end of a political process, but the beginning of a practical effort.

I ask you to build on the momentum of this resolution.

States, and non-State armed groups, must respect their obligations under IHL.

You all know the ICRC as an inherently pragmatic institution. We recognize the dilemmas that exist in times of war, and we recognize the difficult balance between military necessity and humanitarian imperative, between principles and pragmatism, between short- and long-term concerns, between our role as advocates for victims and as interlocutors of parties to conflicts to mitigate the effects of warfare on civilians and civilian infrastructure.

We are committed to principled pragmatism: norms and accountability for such norms are only one side of the coin; condemnations are first and foremost political, not humanitarian acts. As humanitarians, we engage, to change behaviour, to prevent violations of IHL, and thereby protect people.

As you know, we engage with everyone, who can make a difference, and the first in line are medical practitioners themselves.

These organizations represent 30 million health-care professionals from the civilian and military realms, who now have a practical tool to guide them in their daily work.

Actually, several members of this Council already know first-hand how we work, because we have built, jointly, a constructive relationship of deep operational engagement, and feedback, dialogue and corrective measures with regard to the conduct of hostilities.

I am here today, not to cry outrage, but to offer the ICRC's help and constructive engagement to move out of the deep contemporary crisis of health systems in armed conflicts.

I would like to propose to you five workstreams to ensure that the resolution you adopted today is not only text, but also a spirit that is respected in the midst of war:

As an organization working on the front lines of conflicts, we take the resolution you adopted as a critically important political signal and as an encouragement to bear fruit on the ground. As a neutral, impartial and independent humanitarian actor, we are aware that ours cannot be the task to use the resolution, or IHL in general, as part of a public argument indicting counterparts for violations of norms.

Front-line negotiations will need skilled negotiators seeking the consent of parties in order to create an environment, in which the key objectives of this resolution can be concretized and implemented through practical agreements amongst belligerents. We need to be cognisant of the tension between the political guidance the Council is offering today on such an important issue and the practical challenges in contexts of war which frame the work of humanitarian actors on the ground. This is an additional reason, if need be, that a regular exchange between this Council and front-line organizations like MSF and the ICRC are of critical importance.

I told you about the destroyed hospital I saw in Syria a few months ago. What I didn't tell you is that since its destruction, doctors, nurses and volunteers continue to work in the basement of the hospital.

Once a space to stock materials, it has been transformed into a micro-version of a hospital. In one former storage room, premature babies lie in a few generator-powered incubators that weren't demolished by shelling. The hospital may be all but destroyed, but humanity still lives on.

Humanity in war is what we demand. Even wars have limits, because wars without limits are wars without ends. Health-care personnel and facilities are the outer frontier of these limits. Today, with this resolution, you reaffirmed the relevance of the laws of war, the basic humanitarian consensus enshrined in the Geneva Conventions.

To demand they are respected, through practical measures, is the most decisive next step this Council can take, to ensure humanity in war is a reality, and not just an ideal.