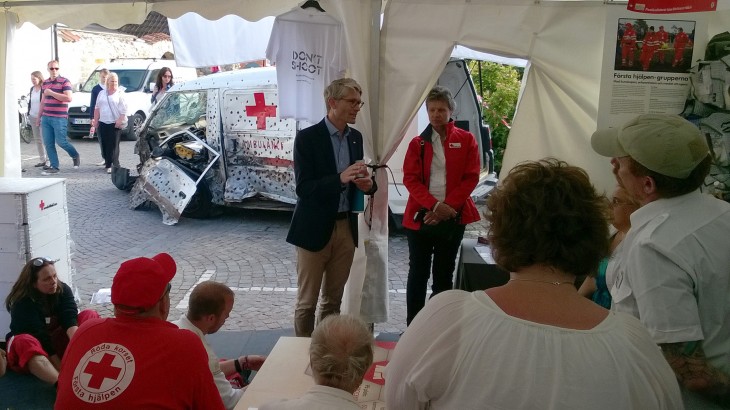 The ambulance's final destination was the medieval town of Visby. The popular political event, Almedalsveckan, brought together some 30,000 people from Swedish political parties, the government, NGOs, academia, the private sector and the media. A round-table on the safety of Swedish health-care personnel was also organized, and involved the ambulance nurses' union, the nurses' union, local police and fire departments, and the disaster-preparedness agency.

The hard work of fifteen volunteers and one staff member organizing the events and sharing information on IHL and HCiD online and offline paid off: more than 30,000 people saw the ambulance. "Some were shocked; some were horrified," says Kristina Borg from the Swedish Red Cross. "But they appreciated seeing what it's really like in the field in such a powerful manner." Support for the HCiD project was unanimous. "In the ten years I have worked for the Movement, I have never seen such strong reactions and such a willingness to support a campaign, nor as much discussion generated by an exhibition."

During the International Conference of the Red Cross and Red Crescent in December, the ambulance will be on display in Geneva – don't miss it!

Should a National Society or an ICRC delegation be interested in hosting the ambulance, they may contact the HCiD team in Geneva.

Our website has a new look
We have launched a new website to keep you better up to date with what is going on with the HCiD project. You can still find us at www.healthcareindanger.org, but there are now even more stories to share. We hope that you like the result and will enjoy reading, listening to and watching the HCiD news.

You can learn more about how HCiD recommendations are being turned into practical solutions in different countries and how more and more people are getting involved in the project. You also can join in the efforts to ensure that health care is safe!

The Conference and the Plenary Commission on HCiD will provide an opportunity to discuss the progress made since the project's launch in 2011, and to promote further action to protect health-care services in armed conflict or other emergencies.

By adopting the Resolution on HCiD and by committing to specific pledges on HCiD, all participants can step up their efforts to translate the recommendations and measures – raised during the global consultation phase – into action.