Hiroshima, Japan: Enhancing International Humanitarian Law (IHL) in a city identified with the horrors of war

Over 60 participants from 18 countries gathered in Hiroshima for an annual regional seminar aiming to strengthen knowledge of the law applicable to armed conflicts (also known as International Humanitarian Law–IHL). For the first time, there was a one-day public session on nuclear issues, a session which included the testimony of an atomic bomb survivor.

The Eleventh South-east and North-east Asia Teaching Session on International Humanitarian Law took place in Hiroshima, Japan, from 11 to 16 July.

"It is truly meaningful to learn IHL in Hiroshima. [This is a body of law] . . . which, as its basic principle, requires distinguishing between civilians and combatants, and which prohibits any direct attack against civilians or civilian objects," Hiroshima Governor Hidehiko Yuzaki stated in his welcoming address during the opening ceremony.

Government officials, scholars and other experts of IHL, and national Red Cross and Red Crescent staff from South-east and North-east Asia participated in the seminar aiming to strengthen knowledge of law and policy related to humanitarian action. The participants exchanged views and information on the implementation, promotion and teaching of IHL. "I learned a huge amount at the session," recounted Mr Steve King, from New Zealand. "The resources will be invaluable as we look to develop an education programme in IHL in New Zealand."

For the first time, a one-day public session on nuclear issues was offered. Subjects that were covered included humanitarian consequences and health effects related to nuclear weapons, civil movements for eliminating nuclear weapons, the International Red Cross and Red Crescent Movement's response to and preparedness for nuclear disasters, and the media's responsibilities to report humanitarian suffering and to provide future generations with the knowledge of the harm of nuclear weapons. One hundred participants, including from the general public, heard the testimony of Mrs Keiko Ogura, an atomic bomb survivor, known as a hibakusha.

"We must learn from history that nuclear weapons bring humanitarian catastrophe." Mrs Ogura continued: "Because I don't want humankind to ever again experience the horror caused by nuclear weapons, I tell my story, especially to those who say nuclear weapons are necessary to promote security. We should have a dialogue with people of different nationalities, so that we can understand how values differ according to the country. Through such discussions, we discover what we have in common; because once a nuclear weapon is used, all the people on this planet share the same fate."

Linh Schroeder, Head of the ICRC Mission in Tokyo, concluded: "Despite the undeniable progress of law and legal protection mechanisms, there are still too many instances of blatant disregard of IHL in many contexts. But rather than give in to discouragement, let's go back to basics: the rules and principles of IHL do save lives and do alleviate human suffering—if respected. The law is not the problem, people are. In everyone's interest, we must all, together, and in our different roles, recommit to humanity. We are therefore glad to have held the regional session on IHL for the first time in Japan, and we look forward to next year's session." 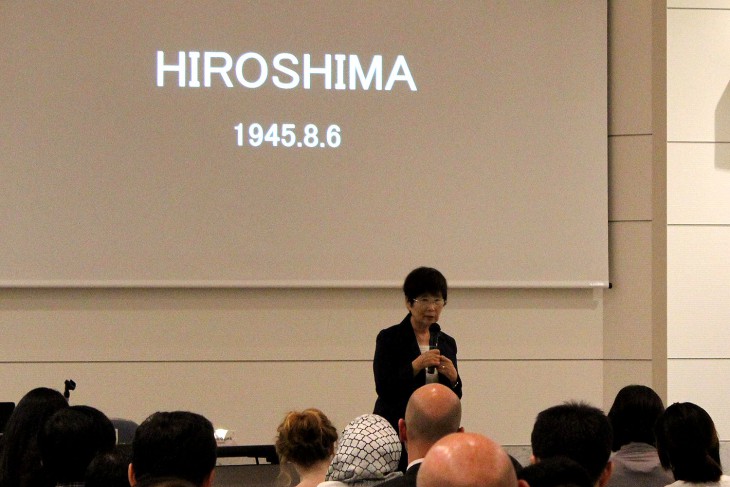 Keiko Ogura, an atomic bomb survivor, was eight years old when she witnessed the horrors that ensued when an atomic bomb was dropped on Hiroshima.  / CC BY-NC-ND / ICRC / H. Makabe