The 17th Red Cross International Humanitarian Law (IHL) Moot for Asia Pacific region, co-organized by the international Committee of the Red Cross and the Hong Kong Red Cross, concluded in Hong Kong. Peking University won the competition, the first time a Chinese mainland team has done so in the 17 years' history of the moot. Singapore Management University finished second. The University of Chinese Academy of Social Sciences was among the top four finalists.

While the competition is aimed at enhancing knowledge and application of IHL and raising awareness of international humanitarian issues among law students, Anne Quintin, head of the Advisory Services of the ICRC, believes it will help bring an Asian perspective into IHL. 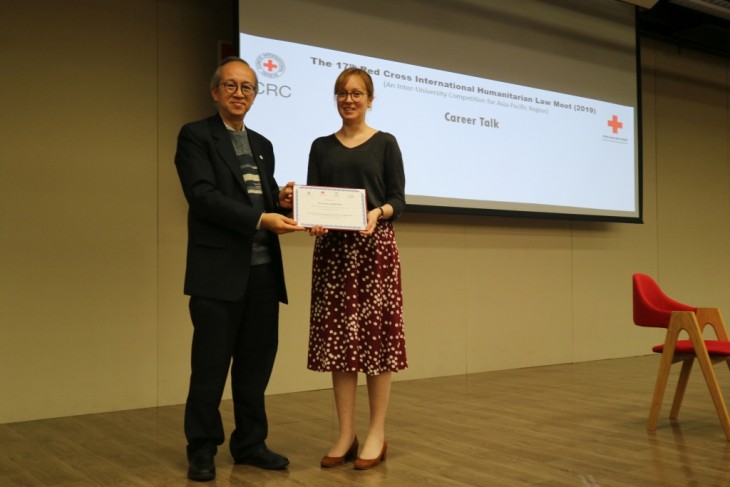 1. We have been organizing the Asia Pacific moot for the past 17 years. What is the impact?

What is very important for the ICRC is the fact that we are able to bring experts from the entire region to help us as judges throughout the week. This is a platform of expertise, a platform for dialogue for experts from different universities, but also for national societies and governments to come and help, and to meet regularly every year to exchange ideas. The network of experts is the key part of what we are doing with the moot court, who are themselves teaching IHL and continuing to build capacity by being involved in this network. A more mid- to long-term impact is that we are creating generations of students who will have knowledge of IHL. They will grow. Some of them will become legal professionals, have positions that deal with or that can influence IHL related matters, or potentially even work with the ICRC in the future. Some students who participated in the Moot Court some years ago are now working for examples at the Special Tribunal for Lebanon or the International Court of Justice.

2. We know there are many other moot competitions around the world. What is the importance of organizing the Asia Pacific version of the competition?

The importance of the moot court is to bring Asian perspective into IHL. This Asia Pacific moot court is the second largest in the world and the largest at the regional level. For us, it's a means to understand how IHL is understood in Asia, because every region has its own way of comprehending international law in general. It's very useful for us to have that Asian perspective and try and adapt our messages to that Asian perspective on IHL. We have delegations in Asia to create networks for us to better understand the culture and create a local network of experts. We really try to include Asian professors for international publications, such as the International Review of the Red Cross. We also rely on Asian professors to bring in the Asian perspective. We are now working with the University of the Philippines and the concerned ICRC delegation for the Asia Pacific Journal of IHL, which will also be one way to strengthen this approach of making the Asian perspective on IHL more present and visible.

3. How do you see the development of IHL and its integration in China in the long term?

I see big potential. China has a big influence in the region. I think it's key that China also shows the example in the region by promoting IHL. We are able to do this moot court here in HK over the last 17 years and every year we have more and more universities and more countries that want to come. Today we already have 24 universities from the Asia Pacific region coming to the moot court. I think it already says a lot of the success and the willingness of states including China as the host to work on the promotion of IHL. I think this year in particular is also a good occasion to do more because it's the 70th anniversary of the Geneva Conventions. We are looking at hosting some events with the Chinese Association of International Law as well as the Chinese government.

4. How do you evaluate the acceptance of IHL in a country?

5. From a global perspective, what are the challenges for promoting IHL in the world?

One element to that is how we do promotion itself. The ICRC for a long time saw promotion as training on IHL mainly. We promote the integration of the IHL into the training of armed forces, the training at university level, etc, which is already contributing to the respect for IHL.

We recently had a study called the Root of Restraints in War which looks at why armed forces, armed groups, weapon bearers decide not to violate IHL but instead choose to respect it. The study shows that the traditional teaching of IHL works in very hierarchical groups, for the military for instance. But in contemporary armed conflicts, we see that armed groups are less and less vertically organized. Rather, they are horizontally organized, do not necessarily have a head and are organized in a multiplicity of factions that collaborate in a way. The study shows that the teaching itself is not as efficient in such cases. What is much more efficient is to link the training of IHL and promotion of rules applicable in armed conflicts to the local norms and culture that the group has accepted and integrated. This is more efficient in ensuring respect for IHL because it's not just imposing IHL on the groups. I think this is one of the key challenges today.