Humanitarian situation in Colombia worsened during 2018

The ICRC reports on its main humanitarian concerns in the country 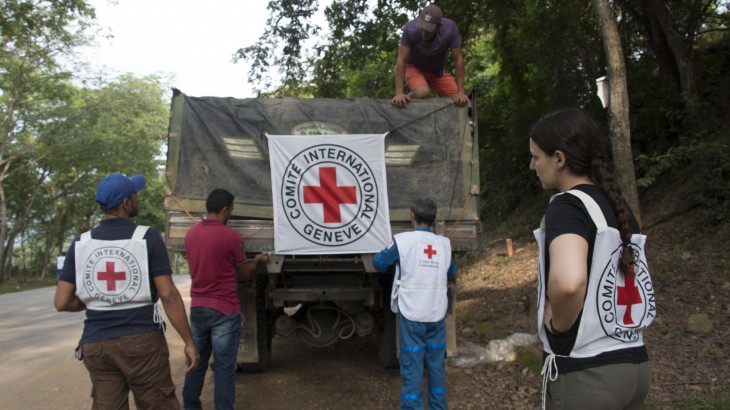 In 2018, our humanitarian work had an impact on the lives of 186,000 people. These are the results of one year’s work, frequently carried out in conjunction with the Colombian Red Cross. CC BY-NC-ND/ ICRC / Margareth Figueroa

Bogotá - Deteriorating security conditions in the country´s most remote areas; at least five ongoing internal armed conflicts; further cases of enforced disappearances; and the risks faced by migrants, especially in areas affected by conflict and armed violence in Colombia, are indications of the complex humanitarian situation in the country.

During the presentation of the annual report entitled "Humanitarian Challenges 2019", Christoph Harnisch, head of the ICRC Delegation in Colombia, expressed his concern about the realities facing vast areas of the country.

"The situation is now more complex than when the Peace Agreement with the FARC-EP was signed. The humanitarian situation in several departments of the country has significantly deteriorated, and this is exacerbated by conflicts at the borders and the extreme vulnerability of migrants arriving in Colombia," he said.

On the Pacific coast and in large parts of the east and south of the country, the absence of a state response to the basic needs of the communities, combined with persistent violations of international humanitarian law and other humanitarian norms by armed groups, have severely affected the living and security conditions of the civilian population.

The ICRC has identified five non-international armed conflicts in Colombia within its classification system, and is investigating other cases. According to its current legal classification, in Colombia there are several armed conflicts between the State and the following Organized Armed Groups: the National Liberation Army (ELN), the Popular Liberation Army (EPL), the Gaitanista Self-Defense Forces of Colombia (AGC) and the factions of the former FARC-EP Eastern Bloc that did not accept the peace process. Furthermore, throughout 2018 the conflict between the ELN and the EPL was included in this classification, which in the last few months has had a major impact on the Catatumbo region.

Last year the ICRC´s humanitarian action benefited approximately 186,000 people. The search for missing persons and a timely response to their families' needs remains a priority for the organization. For the head of the ICRC delegation, the ongoing practice of enforced disappearances is of particular concern: "Since the signing of the Peace Agreement with the FARC-EP we have documented one disappearance resulting from armed violence every four days. However, our figures are not representative of what is actually happening in the country, so the true figure will probably be higher." Harnisch added, "It is unjustifiable that all the armed groups in the country continue using enforced disappearances to intimidate and control territories."

During 2018, the ICRC supported and guided 2500 relatives of disappeared persons in continuing to search for their loved ones, and obtained information on more than 160 cases. In addition, the remains of 45 people were recovered and handed over to the authorities for identification and ten people who had been held by armed groups returned to see their loved ones with the ICRC´s support. "But beyond the statistics reflecting the number of people who have benefited from our work, the truth is that no humanitarian support will be sufficient until the armed groups respect humanitarian rules and commit to leaving the civilian population out of hostilities and conflicts," Harnisch concluded.

Migrants were also one of the priority populations for the ICRC's activities in 2018. The organization supported about 124,000 migrants, returnees and inhabitants of the receiving communities. In this regard, the ICRC field operations coordinator, Christoph Vogt, said that migrants´ exposure to conflict on the border or along the migration route poses additional risks for people who are already in an extremely precarious situation. "The presence of armed groups exposes them to potential abuses, including extortion, threats, recruitment, and physical violence. Women and unaccompanied minors are particularly vulnerable," he added.