'I have never seen so many patients in one day' 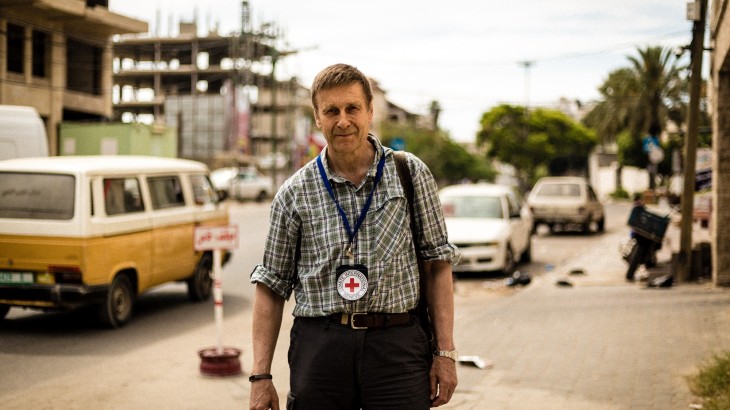 First there was one casualty. Then two, then eight, then 16. The hospital moved from silence to mayhem within hours.

I'm working with an International Committee of the Red Cross surgical team at the Gaza European Hospital in Khan Younis. I arrived in Gaza just 24 hours before Monday's violence began.

As we headed to the hospital, we wondered if this was the calm before the storm – the streets were really quiet. There was virtually no one around. We knew protests were expected.

I have never seen so many patients in one day. The staff had prepared for it, still it was completely overwhelming.

Certain things really stood out. Non-medical staff stepped up and saved lives. I saw cleaners helping medics with patients. I saw management putting on tourniquets to stop people from bleeding to death. Around 120 to 130 patients were treated in the operating theatres at this hospital alone. A bus would arrive suddenly with up to 40 people onboard. We had to just deal with it.

Imagine going down to a packed underground station at rush hour but finding those people all needed urgent medical attention, some might be bleeding to death. It was packed, but still there were people in charge, people organizing.

One case really stood out. I saw a patient who came in bleeding from the femoral artery, the artery in the leg. Blood was shooting up from the trolley to the ceiling. I saw someone pushing down on that artery to save that person's life, until we could put a clip on it.

That person saved a life then disappeared. I will never know who did that but I want to thank them from the bottom of my heart. It was an act of medical heroism. As far as I could see everyone that came in to our surgical ward alive, left alive. I'm immensely proud of the colleagues I work with for that.

I've seen people with gunshot wounds before, but never so many. It's my 9th or 10th mission with the Red Cross and this is the most casualties I've ever seen in one day. I think for the staff here it's the same – they tell me they never saw these many patients in one day, in such a short space of time, even in the past. Monday was a huge logistical challenge, but the teams here succeeded. They can really be proud.

The staff I am working with are brilliant and totally committed, and patients were able to take levels of pain which would have beaten me. There is clearly a lack of supplies and medical equipment. They have to improvise a huge amount to get through to the end of an operation.

Sometimes staff are forced to use the wrong antibiotics. Sometimes they have to go without the right supplies. If a patient has been shot through the leg, the bullet can go through the vital artery and patients can bleed out and die in few minutes. We have to repair the blood vessel and we use Heparin, which is a blood thinning agent. The use of Heparin is totally routine in many countries around the world but there is none here and this makes a huge difference.

My fellow medics here are completely exhausted as a result of the continuous stream of patients. After all, the first influx of wounded was on 30 March. If it happens again, violence on this large scale, it will be really tough to cope – but the staff here will find a way to cope. That's what they do.