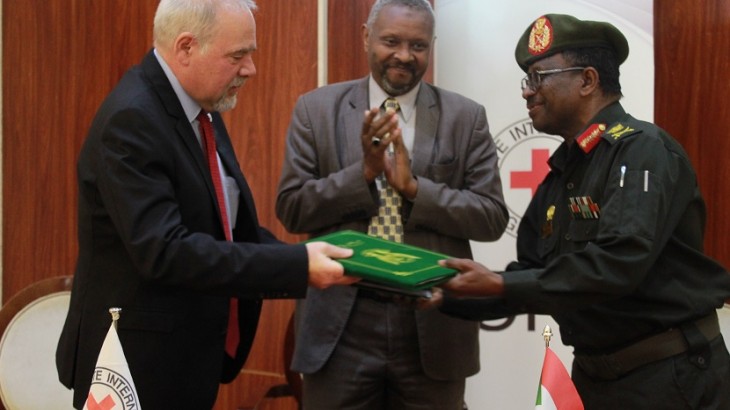 22 January 2020 (Khartoum) – The Sudanese Armed Forces (SAF) and the International Committee of the Red Cross (ICRC) on 22 January 2020 renewed a Memorandum of Understanding (MOU) with respect to the ICRC's support to the SAF for the teaching and integration of International Humanitarian Law (IHL) within their Armed Forces. The document was first signed in 2008. It has been renewed regularly ever since, most recently in 2015.

"Today's signing is an expression of the ICRC's willingness and commitment to continue developing this important relationship in support of the SAF and the respective government Ministries," noted Pascal Cuttat, the ICRC head of delegation, in Sudan during the signing ceremony.

"The rules of war apply to all persons who carry arms, whether they wear a uniform and are part of a recognized Force, or are part of a militia, or a non-State armed group," remarked Cuttat.

The ICRC's interaction with the SAF dates back to the 1990s, and has involved technical support to SAF for training, the provision of teaching materials and the reviewing of training manuals. Over the years, the ICRC has offered advice on standard operating procedures relevant to IHL, on codes of conduct, and – in its role as a neutral intermediary – has facilitated the release of detainees.

"Sudan is currently living through momentous change," said Cuttat. "The ICRC is privileged to be present at such a critical moment, and to be able to offer its humanitarian services in accordance with our mandate. This includes neutral, independent and impartial assistance to people affected by conflict and violence, visits to detainees held by all parties, and the promotion of IHL. With the renewal of this MOU we will continue our support to the SAF for the teaching of IHL to their Armed Forces, and for its integration into all aspects of military conduct."

The ICRC has been working in Sudan since 1978 and extended its operations to Darfur in 2003. It is also operational in Blue Nile and South Kordofan. The organization's mandate is set out in the 1949 Geneva Conventions and their 1977 Additional Protocols, to which Sudan is party.

To preview and download the latest ICRC video footage
in broadcast quality, go to www.icrcvideonewsroom.org

To find out what the ICRC is doing to put an end to attacks
on health workers and patients, go to www.healthcareindanger.org