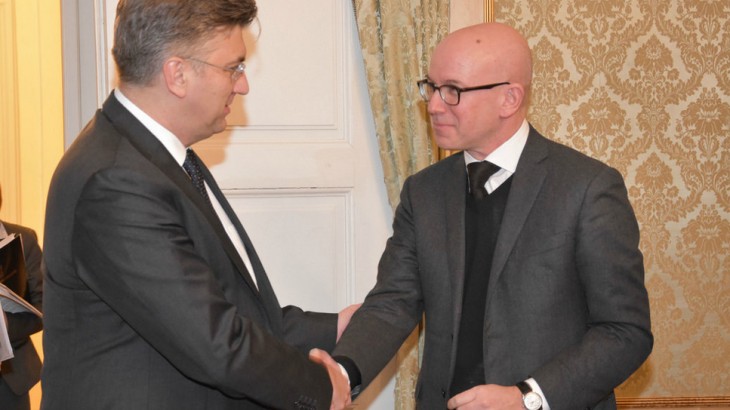 Yves Daccord with Andrej Plenković, Prime Minister of Croatia. Goverment of the Republic of Croatia

The director-general of the International Committee of the Red Cross (ICRC), Yves Daccord, met today in Zagreb with the president of the Republic of Croatia, Kolinda Grabar-Kitarovic, and the prime minister, Andrej Plenkovic. The meeting was a part of the ICRC's plan to intensify efforts to find out what happened to the people who went missing in the former Yugoslavia during the conflicts of the 1990s. Similar meetings have already been held in Sarajevo and Belgrade. The director-general also had the opportunity to hear first-hand from the families of missing people in Croatia about their problems and needs.

"When people go missing, it is an exclusively humanitarian issue, and should be treated as such. The ICRC is concerned about the drastic slowdown in determining what happened to these people," said Mr Daccord. "We are asking the authorities to work to speed up the process for the remaining 2,050 people missing in connection with the conflict in Croatia. This can only happen if the authorities and organizations in the region communicate with one another."

Under its five-year strategy, the ICRC is expanding its research team and the scope of its work to help find new gravesites in the former Yugoslavia. So far the ICRC has helped find several gravesites by using its privileged status to collect and analyse information from national and international archives.

Although the ICRC handed over its files on the missing people to the Croatian Red Cross in 2006, when it closed its office in Zagreb, the two organizations continue to work together closely providing aid to vulnerable people, helping put migrants back in touch with their families and promoting international humanitarian law.

"We appreciate the Croatian Red Cross's humanitarian work on behalf of migrants and the families of missing people, and we will continue to support them in areas of mutual interest," said Mr Daccord. "The Croatian authorities too have recognized the organization's expertise and experience, by giving them a role in coordinating assistance to migrants."