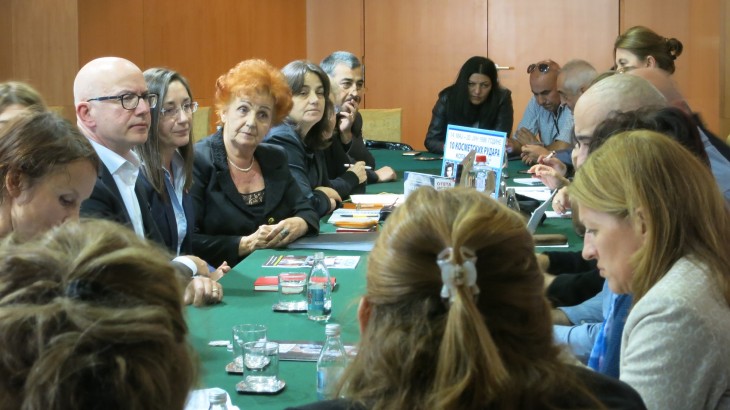 Yves Daccord with the families of the Missing / ICRC

Belgrade (ICRC) – In the first visit to Serbia by high-level officials from the International Committee of the Red Cross (ICRC) since 2001, ICRC Director-General Yves Daccord voiced concern about the slowdown in the process of ascertaining the fate of missing persons and stressed the pressing need to provide their families with answers. He met with Serbian President Aleksandar Vučić, Prime Minister Ana Brnabić and Minister of Foreign Affairs Ivica Dačić.

"The ICRC will make a final push in its efforts surrounding missing persons in the former Yugoslavia by stepping up its direct involvement in the search for information about missing persons cases, but we need the authorities to be on board and to make stronger commitments than ever," said Mr Daccord. "Yes, the victims of the conflicts in this region were the people who disappeared, but the victims are also the families who are still searching for their 10,390 missing loved ones. They have to live every day with not only the emotional anxiety but also legal and administrative obstacles – a burden that must be urgently lifted from their shoulders."

Visiting Serbia – a country where in the 1990s the ICRC was still delivering water, relief and supplies to improve medical care and sanitation, and where up to 2005 the ICRC and the Red Cross of Serbia were assisting over 200,000 internally displaced people from Kosovo – Yves Daccord underlined the modernity of today's Belgrade, where the ICRC chose to set up one of its two service centres that support its global operations.

"Our Belgrade Shared Services Centre, which mostly offers IT support, showcases the comparative advantages Belgrade can offer, in terms of both skilled professionals and its location, and I believe that this is something we can continue to rely on," he said.

The ICRC director-general also met with the Red Cross of Serbia – its main partner in many humanitarian endeavours, from providing aid to those in need, to reconnecting family members separated by migration, to promoting international humanitarian law. "The Serbian Red Cross is one of the oldest National Societies in the International Red Cross and Red Crescent Movement. In working together, we combine the experience and specialized expertise of the ICRC with their local knowledge. Over the years we have made each other stronger and better."

- In 2017 the ICRC conducted visits to five places of detention and monitored about one hundred detainees in Serbia and Macedonia.
- In 2017 ICRC provided training on protecting migrants' rights and meeting their needs for around 30 members of nine Red Cross organizations in the region.
- The ICRC provides technical and financial support to over 1,000 families of missing persons though four family associations in Serbia.