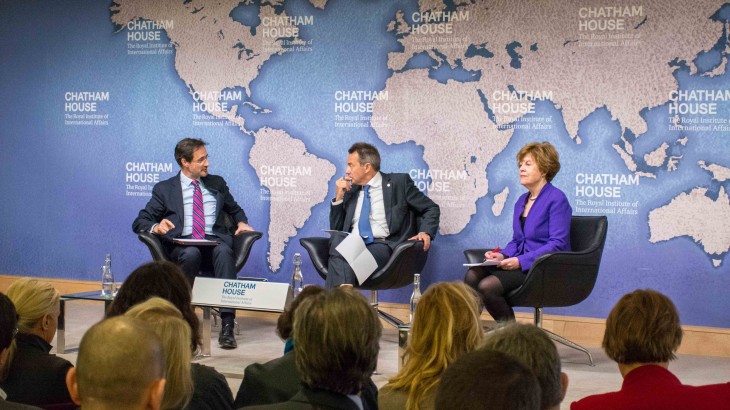 The president of the ICRC took part in a lively discussion at London's Chatham House as part of a two-day visit to the UK last week.

The event saw Peter Maurer and the director of Chatham House, Dr Robin Niblett CMG, discuss themes from the evening's subject: 'Leadership in an Age of Friction: Building a Resilient International Order'.

Chaired by Elizabeth Wilmshurst CMG, the discussion kicked off with Dr Niblett giving his assessment of some of the problems facing the international order and the prospects for inter-governmental cooperation.

"That sense that we're all on a train to somewhere is not the case anymore," Dr Niblett said. "That journey has gone off in a direction and we're not quite sure what it is.

"Why? Because those countries in the West that thought they knew where they were going don't anymore... It's a bit of a free for all at the moment."

Mr Maurer, who has visited Libya, Sudan and Central African Republic in 2018 so far, spoke about his experiences of meeting people in war-torn contexts.

The discussion moved on to how globalisation has created a burgeoning middle class, yet relatively affluent people can still find themselves in need.

Mr Maurer cited Ukraine, Syria, Libya and Nigeria as examples of relatively affluent countries that are each contending with their own humanitarian crises.

"This challenges the whole way we think about a humanitarian crisis," Mr Maurer said. "We sometimes still have this naïve perception that crises are where people don't eat and don't have some fundamental needs covered.

"But in a world which is so connected and where the wealth of others is known on the cell phone of those who haven't [wealth]... [then] the expectations change."

Earlier in the day, Mr Maurer had addressed an audience at the Royal College of Defence Studies where he explored similar themes around leadership and the challenges facing humanitarian action.

One of the questions he faced, which came up again at Chatham House, was the value of international humanitarian law, given the frequent violations.

"If you take two of the major conflicts, Yemen and Syria, the belligerents are going about their business in medieval fashion," said Dr Niblett.

Mr Maurer acknowledged the violations, but pointed to research currently being undertaken by the ICRC, which seeks to highlight the positive impact of international humanitarian law.

"We're really trying to look at places, cases and situations in which international humanitarian law is accepted... by belligerents or arms bearers, as a critical guideline for their behaviour, and has an impact and protects people," said Mr Maurer.

"There is a positive story out there, it's just in a perspective of news coming out of Syria and Yemen each and every day."

The debate closed with both speakers outlining their ideas for positive action to help address some of the issues identified during the course of the evening.

Dr Niblett spoke about the West needing to "fix itself before it can hope to be fixing others". In his view, this would inevitably lead to nations "turning inwards".

"We might regret this and find it frustrating, but it is necessary in my opinion before the West can look out again and be as much of a champion," he said.

For his part, Mr Maurer spoke about the need to strengthen communities at a local level.

"I am always encouraged enormously by the resilience of people and communities in the places in which we work," he said. "And while international organisations and systems may fail on them, they don't fail on themselves.

"What surprises me on each and every visit to field operations is how enormously inventive and industrious these communities are in finding a way out of the situation in which they are...

"[We have to] support those communities to be even faster and better in helping themselves to create businesses, opportunities and educational facilities. That is very much my hope."