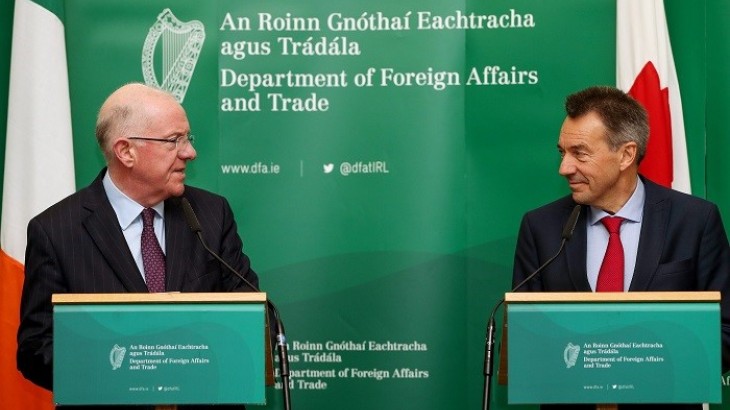 ICRC president Peter Maurer has made his first official visit to Ireland. Landing in Dublin, Mr Maurer said he was looking forward to strengthening ties with Ireland, a long-standing supporter of the ICRC and a country that Mr Maurer described as 'a global leader in humanitarianism.'

During the president's visit, Irish minister for foreign affairs and trade Charlie Flanagan announced a further 2 million euros in core funding to the ICRC, bringing the total amount of Irish funding for the organization to over 14 million euros in 2016.

"Humanitarian crises today have reached unprecedented levels,' said Mr Flanagan following a private meeting with Mr Maurer. "The ICRC is a critically important humanitarian partner for Ireland, operating as it does in some of the most difficult crisis environments in the world."

Mr Maurer underlined that "both the ICRC and Irish Aid recognize the critical importance of strengthening the resilience of communities affected by long-running wars, armed conflict, natural disasters and other humanitarian emergencies."

During his visit, Mr Maurer also met Niall Burgess, secretary general of the department of foreign affairs, and had a meeting with President Michael D. Higgins at his official residence, Áras an Uachtaráin. He also met staff and volunteers from the Irish Red Cross to discuss ongoing support and cooperation.

"The ICRC is very grateful for the continued and solid support of the Irish people," said Mr Maurer. "We look forward to strengthening our engagement with the Irish government and Irish Red Cross on humanitarian issues of shared concern worldwide."

There are currently 32 Irish citizens working for the ICRC, in countries that include Syria, Yemen, Somalia and Afghanistan.