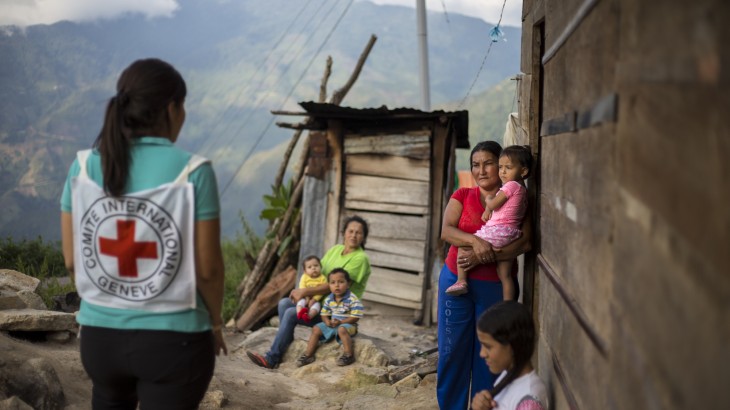 Bogotá (ICRC) – The International Committee of the Red Cross (ICRC) observed a clear reduction in the impact of the internal armed conflict on the civilian population in Colombia in 2016. The bilateral ceasefire between the Revolutionary Armed Forces of Colombia (FARC-EP) and the Colombian government was a milestone and brought about a significant decrease in the fighting and its human cost. Nevertheless, the ICRC highlighted that swifter progress was required on other issues of humanitarian concern, such as searching for missing people, clearing landmines and demobilizing minors from the ranks of the FARC.

In addition, despite talks getting under way between the government and the National Liberation Army (ELN), it is too early to talk about a post-conflict phase in Colombia. The armed conflict is still going on with the ELN, the Gaitanista Self-Defence Forces of Colombia (AGC) and the People's Liberation Army (EPL).

"While we applaud the signing of the peace agreement, it is important to recognize that civilians are still paying a heavy price," said Christoph Harnisch, the head of the ICRC delegation in Colombia. "The tragedy of missing loved ones, the fear of unexploded ordnance, armed violence in urban settings, threats, the restrictions on the movements of whole communities in areas controlled by armed groups, and displacement within cities – these all point to there still being a long way to go in Colombia."

"The peace agreement will not be enough to bring the violence in Colombia to an end," continued Mr Harnisch. "Building a country at peace requires everyone to make an effort and can take decades. Colombian society as a whole must be more determined to tackle the humanitarian challenges. The tragic experiences of the millions of victims of the conflict warrant greater impetus for the peacebuilding process."

In its annual report, the ICRC also called for urgent action to address the country's prison crisis: "In 2016, the conditions of detention of people deprived of their liberty in Colombia did not improve," said Nazim Ayadat, who coordinates the ICRC's detainee-welfare activities in Colombia. "In some cases they actually deteriorated, which illustrates a lack of action by the authorities to meet the needs of some 119,500 detainees nationwide."

In 2016, over 152,000 victims of the armed conflict and other violence benefited from the work carried out by the ICRC in both remote parts of Colombia and urban areas. Many of these activities were carried out in cooperation with the Colombian Red Cross.