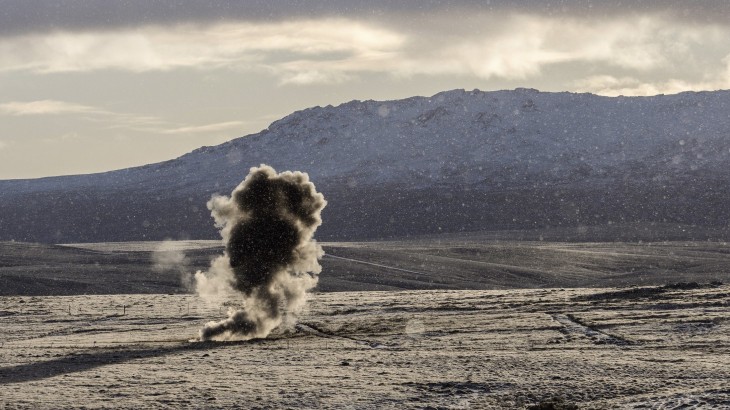 Near Darwin. Close to the Argentine military cemetery, the Falkland/Malvinas Islands Demining Programme Office, a team of largely Zimbabwean operatives highly valued for their long experience, blow up explosive remnants of war by a freezing morning. 35 years after the conflict ended, antipersonnel landmines, cluster munitions and other devices still pollute the land. Fortunately, no islander has been hurt so far. The demining operation was successfully completed there in 2017. CC BY-NC-ND / ICRC / Didier Revol

ICRC vice-president, Dr Gilles Carbonnier's address to the Eighth Meeting of States Parties to the Convention on Cluster Munitions.

We all know the toll that cluster munitions take on people. The child left traumatized and permanently disabled after picking up what they thought was a toy. The farmers facing destitution because their land is unsafe to work. Entire communities displaced and unable to return home to rebuild their lives.

I saw the effects of these weapons for myself in Iraq during the first Gulf War. Almost 30 years later the country remains heavily contaminated, hindering economic development.

Such stories might be familiar but we must stop repeating them. They bear witness to the wide-area effects and general lack of accuracy of cluster munitions, and the high proportion of submunitions that remain unexploded. This is what drove States to adopt the Convention on Cluster Munitions a decade ago.

The past ten years have undoubtedly seen progress on several fronts, bringing improvements to the lives of people and communities affected by these weapons – in Laos, Lebanon, Afghanistan, or any of the more than 20 countries contaminated by cluster munitions.

More than half the world's States are now party to the Convention. The International Committee of the Red Cross (ICRC) warmly welcomes the recent accession of Sri Lanka, and the ratification three days ago of Namibia. A further 16 States have signed the Convention, thereby expressing their support for its humanitarian purpose and objectives. The ICRC urges signatory States to ratify the Convention without delay. We must all continue encouraging States to join the treaty if we are to reach the goal set in Dubrovnik of 130 States Parties by 2020. Indeed, achieving a world free of cluster munitions, as the Convention promises, depends on its norms being universally accepted and implemented.

With the help of the international community, over one-third of States Parties have already succeeded in clearing their territories of cluster-munition remnants. Albania is just one example: there, the clearance of cluster-munition remnants has improved the lives of over 8,000 people across 13 villages. And that's just a slice of the 500 km2 of contaminated land that has been cleared around the world since the Convention took effect. But we cannot stop there. States must continue to dedicate resources to clearance efforts in the territories of other States Parties.

Parties to the Convention have also destroyed the vast majority of their declared stockpiles – over 175 million submunitions. More than half the countries producing cluster munitions have joined the Convention and stopped production and export. Decreasing the number of suppliers not only reinforces States Parties' international promise not to use these weapons, it also makes it harder for others to use them.

The Convention sets the bar for providing assistance to victims of cluster munitions. States Parties have made significant progress in assessing their needs and establishing national action plans. These efforts must continue and expand: national as well as international resources must continue to be committed to ensuring assistance commensurate with the long-term impact of cluster munitions on victims' lives.

Progresses have been achieved thanks to the hard work and commitment of States Parties, in partnership with civil society, mine action organizations and the International Red Cross and Red Crescent Movement. Since the Convention was adopted a decade ago, we have significantly advanced together to limit the impact of cluster munitions on people's lives.

Continued progress is essential to fulfil the Convention's promise of a world free of cluster munitions. There is no time for complacency. The last ten years have shown us what can be achieved with concerted efforts, and should inspire States Parties to maintain the momentum and ensure that they continue to deliver on their commitments of clearance, stockpile destruction and victim assistance.

The rise in the number of reported cluster-munition casualties – mostly civilian – in the past five years is a matter of grave concern to all of us in the Convention community. The death and injury of hundreds of civilians underscores the urgency of achieving universal implementation of the Convention's norms. Any use of cluster munitions is unacceptable, given their well-known and entirely foreseeable indiscriminate effects, which include civilian death, injury and suffering long after hostilities have ended. The ICRC calls on all parties to armed conflicts to forgo the use of cluster munitions and destroy their stockpiles. We also call on producing and exporting States to halt the production and supply of these abhorrent weapons.

States' efforts and successes within the framework of the Convention must be reinforced by all States Parties stigmatizing the use, production, stockpiling and transfer of cluster munitions. Even those States that have neither used nor been affected by these weapons have an important role to play in setting international expectations. Now, as much as ever, you must make clear that any use of cluster munitions is unacceptable.

Just as we knew that signing the Convention ten years ago was but one step in the process, this anniversary marks another step. The Convention's promise will only be fulfilled when the use of these weapons has ceased, when stockpiles are eliminated, when contaminated areas have been cleared and when victims have been assisted in their efforts to rebuild their lives.

Mr President, we will have achieved our goal only when civilians around the world are no longer at risk of death, injury and acute suffering due to these unacceptable weapons.