Identifying the dead: Why the ICRC is increasing its forensic expertise in Africa 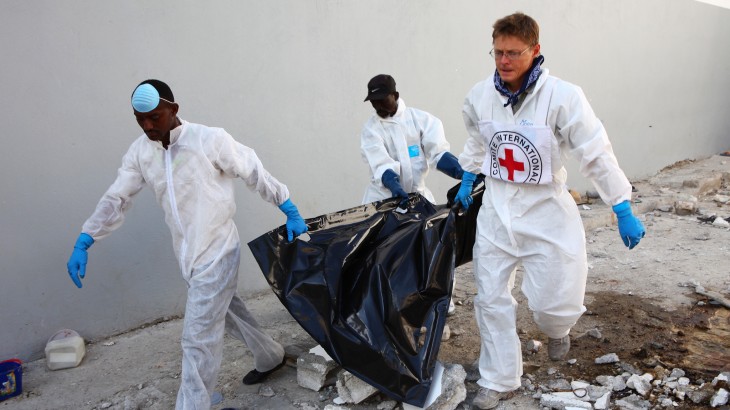 Morris Tidball-Binz, right, the head of the ICRC forensic unit, together with staff from the Central Mortuary in Port-au-Prince, Haiti, carry a victim of the January 2010 earthquake to the morgue for identification and release to family members. CC BY-NC-ND/ICRC

"We don't have a lack of disasters in Africa." That was one observation made at the 4th Annual meeting of the Africa Society of Forensic Medicine, held in Nairobi, Kenya in March. That in part explains why the ICRC recently increased its forensic capacity on the continent by hiring Stephen Fonseca to be its regional forensic coordinator for Africa, based in Pretoria, South Africa, a hub of forensic expertise and training.

Stephen flew to Nairobi again in April to assist with the management of the 148 dead bodies of people killed in a terror attack at a university in the town of Garissa. Stephen and Morris Tidball-Binz, the ICRC's lead forensic expert, talk about the growing field:

Morris: First, there is growing awareness worldwide of the need to address or deal with the dead in armed conflict. The dead feature one way or another in armed conflict, which was less the case a decade or two ago. That's linked to the fact that family and other pressure groups are stakeholders in this greater awareness. So essentially there is greater expectations and demands not only from the general public but the victims' families themselves, and growing awareness of what forensics may actually provide for redress or truth.

Can you give a concrete example?

Morris: In one sector — the aviation industry — every disaster is followed by a very thorough effort to identify and recover everyone, from reasons ranging from insurance to politics. Disaster response isn't what it used to be 20 years ago when someone might have said we only identified 50 percent of the victims. That answer is absolutely unacceptable today.

Stephen, you came to Nairobi's main city morgue after the university attack in Garissa. What did you do?

My role was to offer advice on best practices in disaster management approaches and, more specifically, management of dead bodies in an emergency. These kinds of operations tend to be rather chaotic and stressful for the managers tasked with many important responsibilities and facing enormous political and public pressure to identify all the victims as quickly as possible. I worked with three other Nairobi-based ICRC colleagues to provide the mortuary management with onsite observations related to improving operations to ensure a dignified approach to the handling of the bodies and respect for bereaved families.

In what circumstances does the ICRC deal with dead bodies?

Morris: In Africa the ICRC has directly assisted in the recovery and proper and dignified management of the dead from armed conflicts, including in South Sudan, Libya and CAR. International Humanitarian Law requires that warring parties protect the dignity of the dead, prevent their despoliation and desecration and do everything possible to search, collect and document the dead and, where possible, identify them.

We also help outside of conflict zones. In the 2010 Haiti earthquake the authorities called the ICRC because they were overwhelmed, and later that year there was a big earthquake in Chile, which has a more enhanced system, they still called us to help manage the 200-some victims from that event.

Why is the field of forensics important?

Morris: For humanitarian purposes it plays a key role in all matters related to search, recovery, dignified management and where possible identification of the dead from armed conflicts and catastrophes. The importance of the dead for the families, for the communities, is beyond discussion but also enshrined under all four Geneva Conventions.

Stephen, on your side, what motivates you in the field of forensics?

When you get to work with a family who has lost someone and has been trying to find answers for years and you find that resolution for them through your participation, whatever the activity that brings the positive identification of remains you'll want to keep doing it after. There is such an incredible feeling, there is such gratitude from the family and a real sense of fulfillment. It makes you want to get on to the next case.