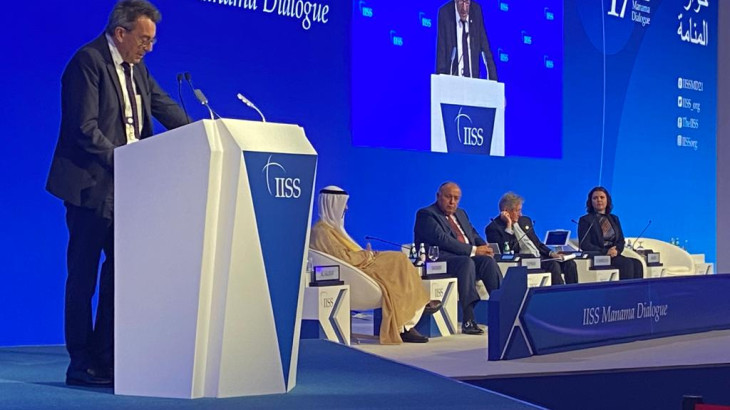 Speech by Mr. Peter Maurer, President of the International Committee of the Red Cross in the IISS Manama Dialogue 2021

When I addressed this summit last year, my main message centered on the imperative to include a human perspective in discussions on security.

The influence of States on broad issues of security or stability – whether through multilateral, mini-lateral, or bilateral cooperation – is a critical factor in whether humanitarian suffering is exacerbated or eased.

At the International Committee of the Red Cross we see the devastating humanitarian impacts, when wars are fought in violation of the law, without mercy or humanity and we see the massively destabilizing effects of uncontained violence.

Protracted conflicts are disrupting entire social systems, essential services and economies, and are profoundly destabilizing societies. Vicious cycles of violence lead to protracted conflicts. We have been for decades in Iraq, Yemen or Afghanistan - this highlights also a failure of the international system with all its mechanisms, procedures, structures and institutions to address the complexities of peace-making.

These decades of war and instability shatter nations: from the immediate impact of the hostilities, to the decay of infrastructure and social systems. They lead to losses of legitimacy for state based political systems, within countries and even more so in the international arena.

Our work is a good example of the intricacies with which the international system struggles. The ICRC works to protect people’s lives and dignity: including treating the wounded, providing food, water, and shelter; visiting detainees; connecting separated families; and restoring essential services and infrastructure.

And our mandate extends further than the delivery of emergency aid. But while humanitarian assistance will help people survive, it is not enough to break vicious cycles of violence.

We work through the mandate provided by States in the Geneva Conventions and in other frameworks governing the use of force in situations of conflict. Changing the behavior of belligerents to limit the impacts of war, to protect civilians, and break endless cycles of retaliation and retribution. Engaging with all sides in a conflict as neutral intermediary and on humanitarian issues, is often an important first step preparing the ground for negotiations by political actors.

Humanitarian action is neutral, independent, impartial; but it also operates within the broader ecosystems of societies.

In the Middle East, the ICRC has seen how multi-layered crises have followed in the wake of large-scale conflict. From financial collapse, contested governance, breakdown of essential services, climate shocks, tens of thousands missing or displaced, communities marginalised.

We see these impacts in many places around the globe. Afghanistan is the latest case in point: There, a collapsing economy and faltering financial flows threaten lives and livelihoods. The stability and security implications are concerning. To focus solely on the impacts on the health system: the ICRC is alarmed that country-wide health care infrastructure is at risk of imminent collapse. Cash shortages concretely mean that health workers are not being paid, health facilities cannot pay for fuel to run their generators or ambulances, and there isn’t food for patients. Power and water supply are increasingly unstable, threatening vital infrastructure beyond the health sector.

Humanitarian action is filling the gaps, but it is not enough. Structural problems require structural responses. We rely on the international community and its efforts at all levels, whether multilateral or mini-lateral, to show leadership based on the needs of people. The present structures as they exist are too often ineffective and new grand designs are not in the pipeline.

This is the moment to explore new forms of multilateralism, often more ad hoc, dynamic, regional or subregional, which are also more issue driven than contextual, more a sequence of bilateral than real multilateral relations and often still unstructured.

In such an environment there are three areas, where leadership is particularly needed.

Firstly, the norms and principles on which the international system is based need greater adherence.

Today, parties to some conflicts continue to flout the most basic rules of international humanitarian law on a scale that is cause for serious global concern.

We see attempts to circumvent the law; narratives which blur the armed conflict threshold or which deny categories of people humanitarian protection. There is an urgent need to unequivocally reject such misconceptions. International humanitarian law is for all affected by conflict, without exception.

IHL remains a powerful guide in balancing military necessity against the humanitarian imperative. It recognizes the use of force as a legitimate tool in armed conflict. It provides rules to guide the application of force, and to limit its humanitarian consequences. I remind you that the Geneva Conventions are based on customary rules codified by militaries, and universally agreed to by States. My point in this discussion on multilateralism is:  While one may argue at a given time whether bi- or multilateral methods are more promising, any international system needs a normative framework. The Geneva Conventions are such a key feature of our universal normative infrastructure for multilateralism.

The second area that I want to highlight is the power that States have to use their influence to support respect for the law and for humanitarian principles. Wherever there is influence, there is a possibility to make a difference.

This is perhaps evermore important today in the absence of strong multilateral action and stalemates at the Security Council.

The numbers of state, multinational and non-state actors involved directly and indirectly in conflicts has escalated over the last decade. More than one-third of non-international armed conflicts today involve “coalitions” of States or non-state armed groups that are parties to the conflict. The greater the number of actors involved in a conflict, the more difficult it can be to achieve a political solution.

Each time an alliance is formed in a war zone, a bond is created that has the potential to increase – or alleviate – human suffering. When armed actors fight alongside each other in loose coalitions with unclear coordination, the result can be a diffusion of responsibility that heightens the vulnerability of civilians.

Yet support relationships between armed actors also offer opportunities to strengthen the protection of civilians. Actors have a responsibility to manage their support relationships towards reducing the human cost of war. It is critical that decision-makers consider pragmatic ways to reduce the risk of harm, whether to protect civilians, those wounded or detained.

We encourage all actors in support relationships to show leadership – to take greater consideration of the risks to victims of armed conflict, and to harness the opportunity to better protect that such relationships represent.

The ICRC continues to develop practical supports for States, such as the release of a new publication called Allies, Partners and Proxies which contains broad guidance for militaries and others on bringing a humanitarian dimension into their partnerships.

Finally, I highlight another opportunity – regional cooperation offers enormous potential to build stability and alleviate suffering of millions of people.

In the Middle East in particular, the absence of strong inclusive multilateral organisations has led over decades to disjointed efforts to bring the many crisis situations towards more comprehensive resolution. Maybe this is the time, where an overarching framework reuniting human, financial, economic and political dimensions, could be a positive formula for multilateralism.

The underlying objective should be to put human needs at the centre, while working across humanitarian, security, stability and peace-building agendas.

The ICRC continues to offer States our services as a neutral intermediary to work towards humanitarian outcomes, which can be essential steps to building trust in contested situations.

In the face of mounting humanitarian needs and deepening insecurity, there is much we can do together to build a better institutional framework for action and more significant outcomes for populations at the same time.