The ICRC regional delegation to Indonesia and Timor Leste further strengthened its well-established collaborations with religious circles through the fifth annual certificate course on International Humanitarian Law (IHL) and Islamic Law, as well as a series of lectures on the same topic, in four Indonesian cities (Surabaya, Makassar, Palu and Jakarta). The certificate course is a well-established programme designed to impart Muslim scholars and lecturers of State Islamic universities with basic knowledge of IHL and its correspondence with the Islamic law of armed conflict.

This year, the three-day program was jointly organized with the State Islamic University (UIN) Sunan Ampel, in Surabaya, East Java. Participants included 44 Law and Sharia lecturers from State Islamic Universities all over Indonesia, as well as three guests from the Philippines and one from Malaysia. The Indonesian participants mainly came from the eastern parts of Indonesia such as Papua, Ambon, Makassar, Parepare, Palu, Manado, Pontianak, Lombok and Madura. Other participants were from former conflict areas such as Aceh. 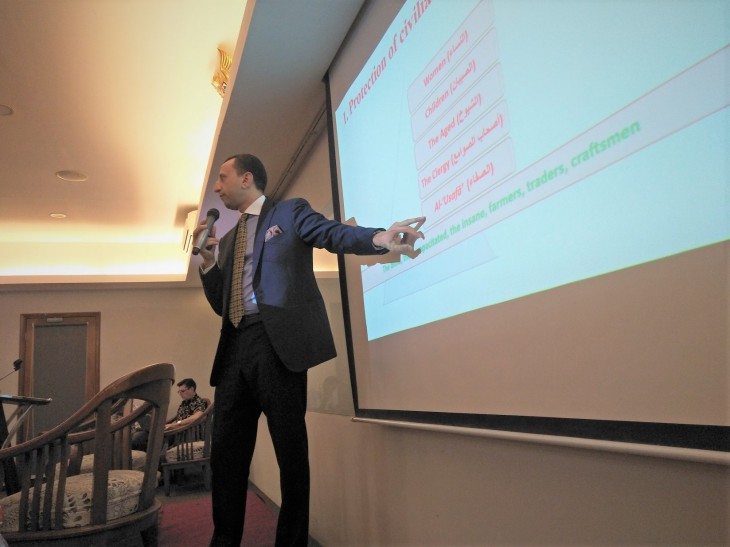 The ICRC regional delegation for Indonesia and Timor Leste invited Dr Ahmed al-Dawoody (ICRC legal adviser on IHL and Islamic Jurisprudence) from Geneva as the main speaker for the programme, in support of its local expert on IHL, Christian Donny Putranto. The head of ICRC regional delegation, Alexandre Faite, stated that the objective of this annual programme was to increase knowledge of, and respect for, IHL as well as to contextualize it with Islamic law, a subject that is far more familiar to lecturers and Muslim scholars.

The vice rector of UIN Sunan Ampel, Wahidah Zein Br Siregar explained the importance of this program for Indonesia. "We are a country of five major islands and no less than 17,000 tiny islands. We have 33 provinces ranging from Sabang in the far west to Merauke far in the east. We have six major religions and hundreds of local religious beliefs; hundreds of ethnic groups and no less than 300 local languages." She emphasized during the opening remarks of the Certificate Course on 2 September that "those facts alone could lead us to be a country that is prone to conflict, at least to internal conflict." 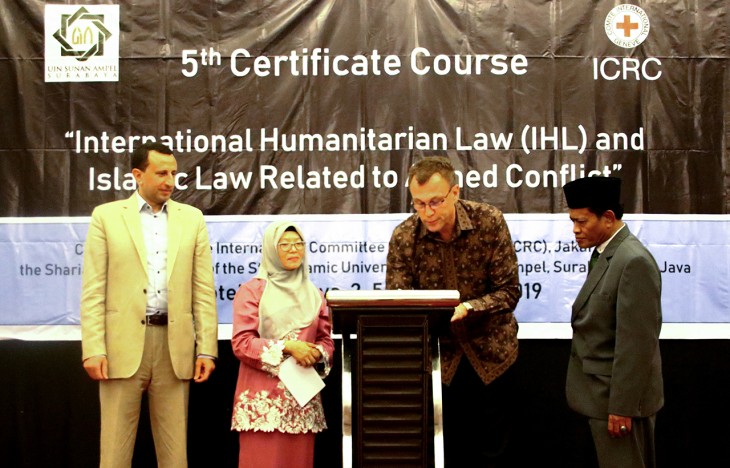 Apart from the successfully held certificate course, the ICRC was also invited to give a lecture on correspondences between IHL and Islamic law of armed conflict in front of hundreds of students from the Sharia and Law Faculty of State Islamic University (UIN) Sunan Ampel, Surabaya, as well as a lecture to students of International Relations at University of Bosowa, in Makassar, South Sulawesi. In Palu, the ICRC made a courtesy visit to the spiritual leader of Alkhairaat foundation, Habib Saggaf bin Muhammad Aljufri, and gave a lecture in front of several hundred students of the University of Alkhairaat, Central Sulawesi. In Jakarta, the ICRC also held a lecture for International Relations students of the State Islamic University (UIN) Syarif Hidayatullah on 10 September, featuring Dr Ahmed al-Dawoody as the main speaker.

This series of events culminated with a courtesy visit to the minister of religious affairs of the Republic of Indonesia, Lukman Hakim Saifuddin, on 11 September. The ICRC's head of regional delegation, Alexandre Faite, introduced the ICRC, provided updates on its activities around the world - especially the ICRC's networking with religious circles - and discussed the possibility of establishing a humanitarian partnership with the ministry. The minister welcomed this idea and assigned the director of Islamic Higher Education, professor Dr Arskal Salim, as the focal person from the ministry to follow up the initiative for further engagement between the ICRC and religious circles across Indonesia.