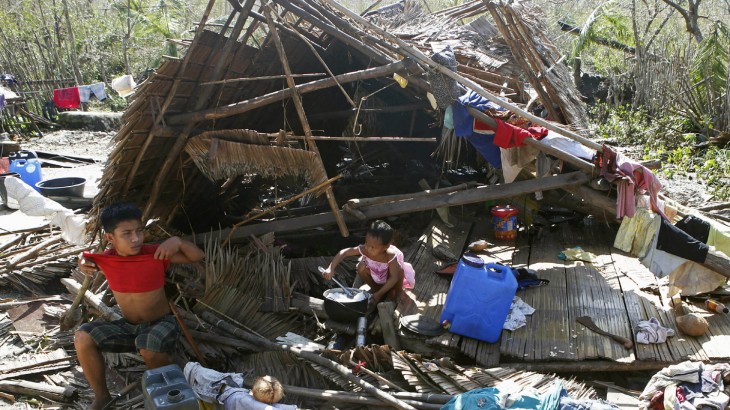 Can-avid, Samar, Philippines, 8 December 2014. A girl scoops rice from a pot outside a house destroyed by Typhoon Hagupit, which has caused considerable damge in the central Philippines. ©Reuters

Manila / Geneva – December 8th, 2014. The International Red Cross and Red Crescent Movement is gearing up for a humanitarian relief effort in response to the impact of Typhoon Hagupit (locally known as Ruby), which is sweeping across central Philippines and southern Luzon island. Although the storm has weakened since it first made landfall on Saturday night, it continues to traverse slowly across islands in the Sibuyan Sea with winds gusting up to 150 Kph. The heavy rains accompanying the typhoon are the greatest cause for concern. Chairman of the Philippine Red Cross, Richard Gordon, warned against complacency.

"At this stage, we don't know the full extent of the damage caused by Typhoon Hagupit. It will linger over the Philippines and we can expect incessant rains to continue for the next few days. We are very concerned about the safety of people living in low-lying and mountainous areas who are at a high risk from flash-floods and landslides", explains Mr. Gordon.

Hagupit is the strongest typhoon to hit the Philippines since Typhoon Haiyan struck last year. While not as strong as Haiyan, Hagupit could have significant humanitarian consequences for thousands of people living in its path, particularly those still recovering from the effects of Haiyan.

"This is the third consecutive year that the Philippines has been hit by a major typhoon, but swift and pre-emptive early warnings and evacuations by the government and the Philippine Red Cross have ensured that casualties have so far been minimal", says Kari Isomaa, head of delegation of the International Federation of Red Cross and Red Crescent Societies in the Philippines

Red Cross assessment teams visiting Samar Island and Southern Luzon found roofs blown off, trees brought down and electricity and communication lines cut in some areas. There are fears that the impact of the typhoon could be more severe in remote areas of northern Samar which have been so far inaccessible due to blocked roads.

"It is too early to give an accurate assessment of overall needs. Food, clean water, emergency shelter materials and primary health care could be among the priorities", explains Pascal Mauchle, head of delegation of the International Committee of the Red Cross in the Philippines. "The typhoon hit areas where poverty and vulnerability levels are very high, in particular within communities suffering the consequences of protracted armed conflicts."

Today, further assessments are being carried out to inland and coastal communities. Collectively Movement partners have pre-positioned food and non-food relief stocks sufficient for 75,000 families. Hundreds of Philippine Red Cross volunteers have also been mobilized to pack relief items and provide cooked meals to thousands of people who remain in evacuation centres.

"It is re-assuring to have the support of our partners in the International Red Cross and Red Crescent Movement. Over the past year they have stood with us to support the recovery of thousands of people who were affected by Typhoon Haiyan and they have also been helping us to meet humanitarian needs elsewhere in the country," says Gwendolyn Pang, secretary general of the Philippine Red Cross.

For further information or to set up interviews contact: