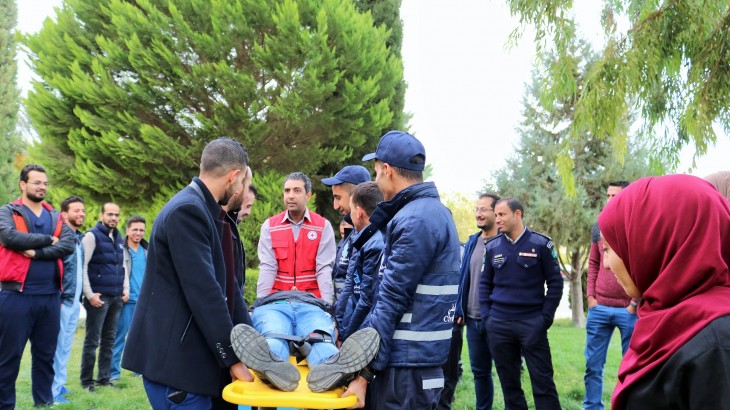 In 2018, the International Committee of the Red Cross (ICRC) in Jordan continued to support vulnerable host communities and Syrian refugees alike, by providing assistance and strengthening their self-sufficiency and resilience in a sustainable manner, through livelihood and water infrastructure projects.

In the reporting period, the ICRC carried out a wide range of activities, in some cases in partnership with the Jordan Red Crescent Society (JRCS). These activities include: restoring family links, visiting detainees, helping families of missing persons, promoting respect for international humanitarian law (IHL) and supporting health care providers and other relevant institutions to increase their capacity to respond to emergencies.

To help Syrian refugees and local communities cover their basic needs, the ICRC, in cooperation with the JRCS:

To improve access to clean water for Syrian refugees and local communities, the ICRC, in collaboration with the Ministry of Water and Irrigation, the Yarmouk Water Company and Maan Water Administration:

As part of its efforts to support the health care system in Jordan, the ICRC:

To help families restore/ maintain contact with their relatives, the ICRC:

To help improve detainees’ treatment and living conditions, the ICRC:

To help families of persons who went missing in Syria, the ICRC conducted a multidisciplinary assessment in 11 governorates and in Zaatari and Azraq camps. The assessment supported the ICRC in identifying the needs of the families of missing persons, which will be addressed directly or indirectly through referral mechanisms. It included:

To promote respect for IHL and humanitarian principles, the ICRC:

Working in partnership with the Jordan Red Crescent Society

As part of its efforts to support the JRCS, the ICRC:

The ICRC shipped by road, sea and air the following items from the Logistics Support Center in Amman to Syria, Iraq, Libya, Yemen and the Palestinian Occupied Territories: