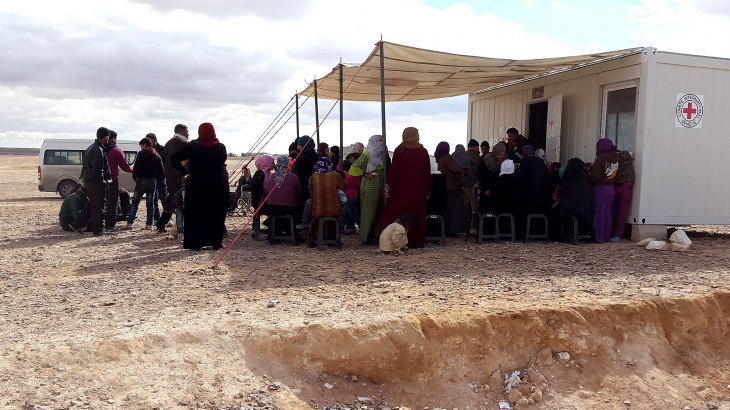 Amman (ICRC) – With the Syrian crisis showing no signs of abating, thousands of people continue to gather at the Hadalat and Rukban crossing points along Jordan's north-eastern border, hoping to enter the country. The International Committee of the Red Cross (ICRC) has been working along this border (also known as the "berm") since mid 2013, at the request of the Jordanian authorities.

In November 2015, the authorities formally granted other organizations access to the berm and the ICRC initiated a handover process to the World Food Programme (WFP) for food deliveries and to UNICEF for water deliveries. The ICRC continued to provide food and water at the berm until those two organizations became fully operational. By the end of February 2016, the WFP was able to assume the task of providing food to those stranded at Hadalat and Rukban, and by the end of March UNICEF was able to take over providing water.

Between January and March 2016, the ICRC focussed on expanding its basic health-care activities at the berm and continued to provide other essential supplies. It also helped people stranded at the berm and those accommodated temporarily at the ICRC-supported transit site in Ruwayshid to contact their families.

Also during this period, the ICRC's efforts at the berm included:

More facts and figures on our activities in Jordan.

Facts and figures, January to April 2016