The ministry of Foreign Affairs of the State of Kuwait, the International Committee of the Red Cross (ICRC) and the Kuwait Red Crescent Society (KRCS) attended the third High-Level Policy Dialogue, an annual discussion of humanitarian issues and possible responses, via video conference, on 29 June 2020.
Statement 29 June 2020 Kuwait 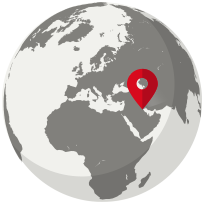 The three organizations, represented by their leaders, discussed current responses to the COVID-19 pandemic, and a number of humanitarian issues of common concern in order to develop a mutual vision of contemporary humanitarian concerns, and appropriate steps to address them and respond to them. Drawing on their distinct perspectives, HE Sheikh Dr Ahmed Nasser Al-Mohammed Al Sabah, Minister of Foreign Affairs, Peter Maurer, President of ICRC and Dr Hilal Al Sayer, Chairman of KRCS:

-       Expressed contentment with the results achieved in the service of international humanitarian work during the period between the second and third strategic dialogues, especially with regards to the positive mutual understandings between the ICRC and KFAED, and high-level contacts between the two sides, whether in Kuwait, Geneva or New York.

-       Reiterated their commitment to fighting the dire consequences of the COVID19 pandemic through humanitarian and development work on both local and international levels. It was noted that these consequences went far beyond the direct impacts of the disease and include broad and long-term secondary impacts owing to the economic and social disruption caused by the pandemic.

-       Acknowledged the crucial role of countries in deploying proportionate measures to address the COVID19 pandemic while facilitating, through feasible exceptions or exemptions, the essential and ongoing work of those responding to the pandemic.

-       Insisted on continuing cooperation and coordination to reach an international consensus on contemporary humanitarian challenges, to contribute to ensuring respect for human dignity in the context of armed conflict, and through an effective response to the needs of those affected.

-       Underscored the importance of the critical nexus between humanitarian action and development work. Working within this nexus requires continuous open dialogue and engaged humanitarian partnerships between the State of Kuwait, KRCS, and ICRC.

-       Agreed to explore and pursue concrete projects guided by shared objectives to alleviate suffering and to reinforce this action through the annual High-Level Policy Dialogue and other platforms and engagements.

-       Commended the special role of the ICRC in the transfer procedure of the remains of Kuwaiti citizens found on Iraqi soil, and for its substantial efforts made during the investigative process of Iraqi citizens’ remains on Kuwaiti soil.

-       Expressed appreciation for Kuwait's commitment to the plight of missing persons and their families. This commitment was exemplified by Kuwait's sponsorship of the United Nations Security Council Resolution 2474.

-       Agreed to invite Middle Eastern countries to participate in the initiative concerned with establishing a regional platform for missing persons, and participate in special preparatory workshops, to discuss ways of implementing Security Council Resolution 2474.

-       Emphasized the continued support of the state of Kuwait to the efforts of the ICRC, and expressed the importance of humanitarian action, which takes into account the tripartite approach adopted at the World Humanitarian Summit in 2015, namely humanity, peace, and development.

-       Agreed to continue the joint cooperation, confirming the importance of holding the fourth High-Level Policy Dialogue in June of next year.