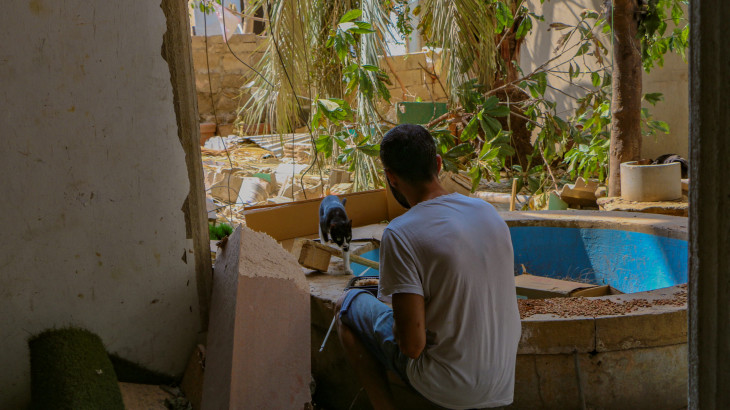 At least 180 people lost their lives in the 4 August 2020 blast and some people remain missing or unidentified. ICRC

Beirut/Geneva (ICRC) – Three weeks after a massive explosion ripped through Beirut port and surrounding neighbourhoods, the physical and psychological damage it inflicted is staggering.

At least 180 people lost their lives in the 4 August 2020 blast and some people remain missing or unidentified. More than 6000 people were injured, and hundreds remain in hospital.

"Not all wounds are visible, whether to a body or a beloved city," said Marco Baldan, a surgeon with the International Committee of the Red Cross in Lebanon who helped coordinate the emergency response. "On top of the horrific physical injuries that are being treated in hospitals, people risk developing huge, hidden scars unless they are supported through the psychological consequences of this catastrophe. Mental health support is a vital part of the medical response."

The accounts of suffering caused by the explosion are harrowing. Some people saw family members die in front of them while others are still looking for missing loved ones. Others saw their homes crumble around them and a lifetime of possessions destroyed in a split second. Adults and children who received life-changing injuries struggle to adapt to their new reality, others feel guilt that they survived or were not able to save others in the aftermath.

"The impact on people has been horrific," said Isabel Rivera Marmolejo, the mental health delegate for the ICRC in Lebanon. "A Syrian refugee who lost her sole surviving child in the explosion called our hotline. She had already lost one child in the war and was overwhelmed with grief and needed urgent help."

"Even people who appear relatively unscathed or who escaped with minor injuries feel a profound sense of loss or despair," she added." This is a very normal reaction to such a shocking event and they do not have to deal with it alone. There is support available."

Residents of one of the worst-affected neighbourhoods in the city summed up the disbelief at what had happened and fear for the future when they spoke to the ICRC.

"We are unable to process it," said Rodrigue Makhlouf, a resident of the Karantina neighbourhood, near the port. "We've witnessed lots of incidents and explosions in Lebanon, but this is the first time we feel unsafe."

"My daughter was injured on her face and ears," said Elie Al Chayeb. "The other day she kept screaming... How will children overcome the memories of what happened?"

The explosion happened when Lebanon was already in an extremely fragile state, after months of battling the coronavirus pandemic amid a spiraling economic crisis. The loss of jobs, businesses and savings had a harsh impact on mental health in the past ten months, with an increase in symptoms related to depression, such as suicidal thoughts and hopelessness.

"Once the pandemic started, anti-coronavirus measures like lockdown and curfew hit people's traditional coping mechanisms, such as gathering socially and seeing friends, sharing their worries and frustrations," said Isabel Rivera Marmolejo. "Now, the explosion is one more crushing blow."

The situation is particularly difficult for some of Lebanon's most vulnerable groups, including the 1.5 million population of Syrian refugees. For many of them, the explosion was a distressing reminder of the conflict and instability they had fled, bringing flashbacks, nightmares and anxiety.

"My son needs mental health support," one Syrian refugee who didn't wish to be named told an ICRC team. "He can't sleep because all the memories from the war in Syria are coming back to him. He is having anxiety attacks every night where he starts shaking in fear."

Another vulnerable group are the country's foreign domestic workers, many of whom have found themselves both homeless and jobless, unable to access the help they need in their own language.

Lower-income families are also at risk of missing out on mental health and psychosocial support services, which are prohibitively expensive in Lebanon's many private hospitals.

"There are many reasons why people might not get the help they need right now, including not being able to access or afford services, language issues and a societal stigma around admitting they need to talk to somebody," said Marmolejo. "We want to make it as easy as possible for everybody to take the first steps towards support. Our hotline is open on 70 34 16 75 and our services in Beirut and Tripoli are free of charge. People do not have to do this alone."

The ICRC has an eight-person clinical psychology team working in Lebanon in various capacities, including supporting victims of violence and refugee communities. In the aftermath of the explosion, we opened a hotline for people who wish to access the ICRC mental health services and physical rehabilitation assistance. We are also providing mental health support to wounded people at Rafik Harari University Hospital in Beirut and the Weapon Traumatology and Training Center in Tripoli, northern Lebanon. The ICRC hotline number is 70 34 16 75 (for calls inside Lebanon)

For more information or interviews, please contact our spokespeople: