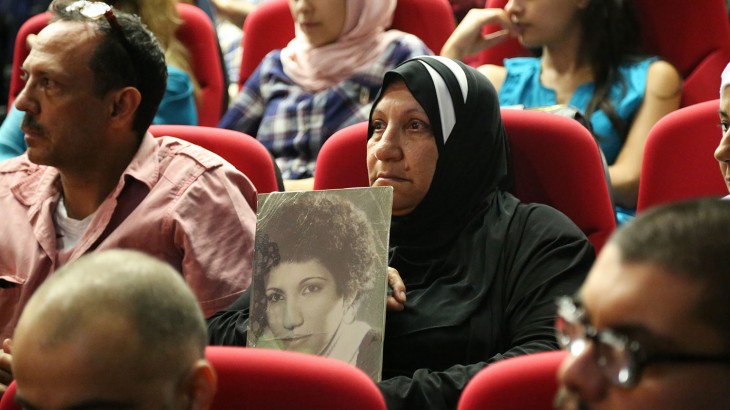 A mother holds a photo of her daughter who disappeared during the civil war, at the ICRC's commemoration event for missing persons in Lebanon, 30 August 2016.

Beirut (ICRC) – A conference on the fate of thousands of people who have been missing since the Lebanese civil war took place today. The event, organized by the International Committee of the Red Cross (ICRC) and the Lebanese authorities, coincided with the International Day of the Disappeared and was attended by representatives from key ministries, the Lebanese Armed Forces and the Internal Security Forces, as well as members of the judiciary, forensic experts and parliamentarians.

"This conference is a positive step forward, and illustrates the Lebanese government's concern about the fate of missing persons," said Marco Succi, deputy head of the ICRC delegation in Beirut. "But what is crucial now is that the government also shows more commitment to resolving the issue. For this, the Cabinet must allow the Internal Security Forces to collect biological reference samples with the ICRC, and the government must pass the law on the missing."

The conference was followed by a public ceremony with the families of missing persons and civil society members, to commemorate the thousands who went missing during the Lebanese civil war.

"We need to make sure that this issue is not forgotten, that families' right to know is upheld and that their suffering is alleviated," said Marco Succi, addressing the attendees at the ceremony. "They have waited long enough. Time is running out."

Artists, students and civil society representatives joined in to highlight the plight of the families, their search for answers and demands to the government. An orchestra from the National Conservatory for Music and the singer Oumayma al-Khalil also took part in the commemoration, while students from the Lebanese Academy of Fine Arts contributed with a visual art exhibition.

"It is our right to know the fate of our loved ones," said Wadad Halawani, head of the association for the families of the missing. "We have been hanging on to this right for more than 30 years and we will not let go."

Since 2012, the ICRC has been collecting ante-disappearance data from the families of the missing. Its teams have so far carried out almost 2,400 interviews, and recently began collecting biological reference samples that can help identify human remains. The ICRC has helped build the capacity of forensic experts through specialized training in Lebanon and abroad.

Lebanon's civil war ended more than 25 years ago. But her war never did: