Lebanon: Meeting the need for water 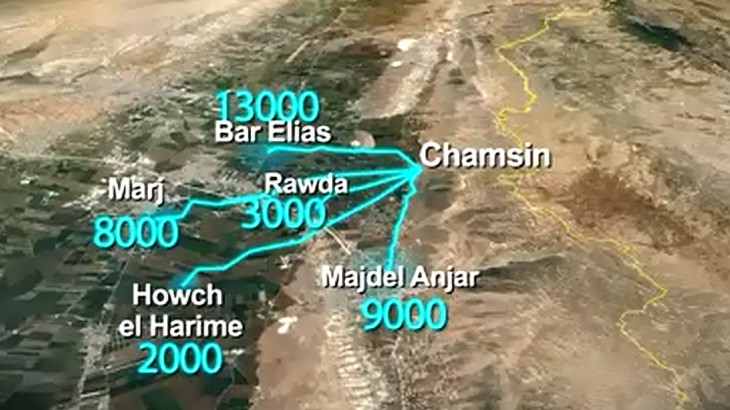 Beirut (ICRC) – The International Committee of the Red Cross (ICRC) will inaugurate three water projects in the Bekaa valley, in eastern Lebanon, today. The projects were carried out in cooperation with the Bekaa Water Establishment (BWE).

"The conflict in Syria drove large numbers of people into Lebanon. And this put the water infrastructure of the country, particularly in the Bekaa valley, under heavy strain," said Jorge Solana, an ICRC water-and-habitat engineer in Zahle. "Which is why we decided to conduct these projects: they will improve access to water for both the people who came from Syria and the communities hosting them. When the projects were completed, they were handed over to the local water authorities."

The projects were implemented in Zahle, Hermel and Chamsine. In Zahle, the new pumping station has increased the availability of water significantly: 60% of the population – 31,500 residents and 8,000 people from Syria currently staying in the area – now have access to water, as opposed to 36% in the past. The renovated pumping stations in Hermel, and the new control panels and networks, enable water to be pumped and stored in a new 2,000-cubic metre reservoir that serves more than 35,000 people. In Chamsine, three high-capacity wells equipped by the ICRC supply 250 litres of water per second to the pumping station; over 106,000 people benefit.

"There was a big need for improving the water supply system in the Bekaa valley," said Maroun Mousallem, director-general of the BWE. "We asked the ICRC to help and it did. By launching these projects, we have increased our water production and we will be able to waste less water than in the past; all this benefits more than 200,000 people."

The ICRC has been developing water projects throughout Lebanon for the past few years. In the first week of May 2015, it completed construction of a borehole that will increase water supply in the area of Hasbani, serving dozens of thousands of people in the south of the country. Water projects have also been completed or are being carried out in other places, such as Tripoli, Sultan Yacoub, Douris, Laboue, Wavel, Qaa, Wadi Jilo and Hebberiye.

"What we are doing in Lebanon is part of a broader ICRC response to the water problem in the Middle East, which has been exacerbated by conflict," said Michael Talhami, a regional water-and-habitat coordinator with the ICRC. "We are searching, throughout the region, for long-term, sustainable solutions to ensure access to water." (See our report: How war in the Middle East is bringing the region to the brink of a water catastrophe)

The ICRC has had a presence in Lebanon since 1967. It has offices in Beirut, Tripoli, Tyr and the Bekaa, and a staff of 245; its annual budget for Lebanon is 45 million Swiss francs.