Lebanon: “From one minute to the next, the world changed for Beirut” 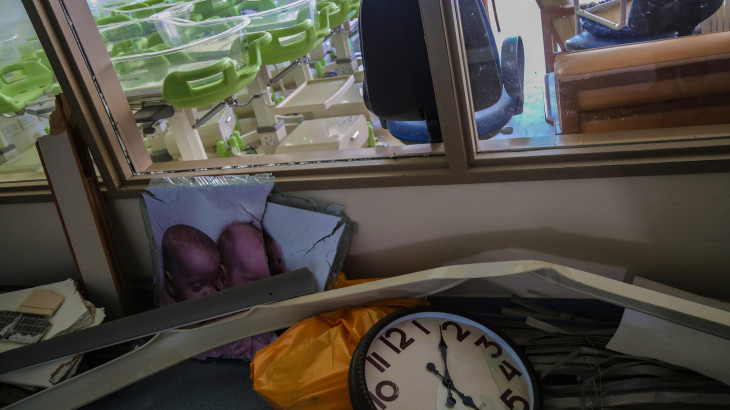 In the photo above, a clock sitting in a damaged hospital remains stuck at the time that the explosion hit the city. ICRC

One week after a devastating explosion ripped through Beirut, the city's remaining hospitals are still full and hundreds of thousands of people need help to rebuild their lives.

Hopes of finding survivors amid the rubble are fading fast. At least 160 people are confirmed to have died in the explosion, while more than 6,000 were injured.

Three major hospitals were damaged or destroyed. One visited by the ICRC last week is unable to accept a single patient due to the damage. It would normally be able to treat up to 8,000 in-patients and 14,000 emergency cases per year.

"From one minute to the next, the world changed for people in Beirut," said Basma Tabaja, deputy head of the ICRC's delegation in Lebanon.

"Nearly half of the city received significant damage. Almost 300,000 people lost their homes and belongings in the blink of an eye.

"There is overwhelming grief for those lost, and those who survived now need enormous support. Many were left with life-changing injuries, and for others this blow on top of so many other crises is too much to handle alone."

This catastrophe layers more misery on top of existing crises, including a deteriorating economic situation made worse by the COVID-19 pandemic and measures aimed at stemming its spread.

The damage at the port will have a huge impact on Lebanon and the region, as it is the pipeline for more than 80 per cent of Lebanon's imports. The price of food and other goods had already dramatically increased in the last ten months with some goods rising by more than 90 per cent, and there are fears of more rises now.

In the immediate aftermath of the explosion on 4 August, the ICRC distributed medical supplies to 12 hospitals in and around Beirut. We are continuing to support these hospitals as well as our partner, the Lebanese Red Cross, to help address the myriad of urgent needs people are facing in Beirut.

Medicines and medical equipment are in short supply, while the psychological impact on those affected by the blast cannot be overlooked. We are providing mental health support to wounded people at Rafik Harari University Hospital and will provide physical rehabilitation to people hurt in the explosion as well.

The ICRC has begun delivering food parcels to a local organization supporting people left homeless. Around a quarter of a million people lost their homes, many others have seen their properties damaged.

The ICRC teams are assessing damage to properties, along with the electricity and water infrastructure. Together with the Lebanese Red Cross we are also helping families to find missing loved ones. To help meet the needs of people in Beirut the ICRC has launched an appeal for funds, as has the Lebanese Red Cross.

We have spokespeople and operational colleagues available for interview from Beirut.

For more information and to arrange interviews please contact: