Life without fear is overdue in Colombia 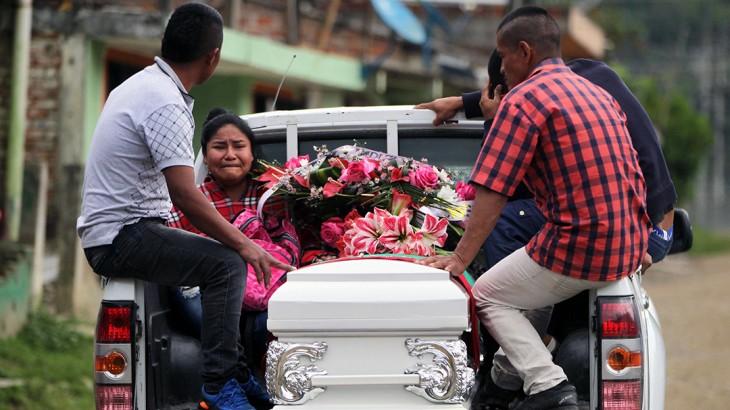 Bogotá (ICRC) – The growing number of victims of explosive devices and anti-personnel mines, the confinement of communities, ongoing forced displacement and disappearances, attacks on health-care personnel and facilities and breaches of international humanitarian law (IHL) are indicative of a critical backdrop in some regions of the country.

In 2019, the International Committee of the Red Cross (ICRC) recorded 352 victims of explosive devices and anti-personnel mines, 159 of whom were civilians. Accidents occurred in 13 departments of the country; Norte de Santander, Arauca and Antioquia, where 57 per cent of the casualties were recorded, were those with the biggest increase in victims.

In the same year, according to official sources, more than 25,000 people were subjected to mass displacement and approximately 27,600 remained in confinement. This cruel reality shows that the armed conflict is deepening and the humanitarian situation is worsening in the most vulnerable areas of the country.

"Over the last year, our teams noted 987 violations of IHL and other humanitarian rules. Most of them were serious incidents such as threats, killings, acts of sexual violence and the recruitment of minors. Civilians are still suffering from the worst consequences of armed conflict and violence. Moreover, in many cases, victims say nothing about what is happening because they are afraid of reprisals. Life without fear is overdue in Colombia," said Christoph Harnisch, head of the ICRC delegation in Colombia, during the presentation of the annual report.

It is worrying that armed groups still ignore the minimum rules of war. Last year, the ICRC documented 93 new disappearances. The figures partly reflect the complex situation within the country, however other indicators such as those of mental health status, despair and fear cannot be quantified. As Harnisch explained, "The scenario that we are seeing today is more complicated than last year. Armed groups are more fragmented and the conflict is developing in new and different ways in each area. These circumstances make it difficult to pursue our dialogue with all armed groups in order to promote the respect of humanitarian standards and protect civilians."

In 2019, the Ministry of Health and Social Security recorded 218 attacks on health-care staff and infrastructure. In most cases, the attacks took the form of injuries and threats. These facts, combined with the precarious conditions in medical facilities have a direct impact on the work of health-care staff and impede their fundamental task of saving life. For residents of the areas worst affected by conflict and armed violence, the main features of everyday life are a deterioration in the humanitarian situation and the Government's inadequate response as far as guaranteeing communities' minimum needs is concerned.

Last year, 557,000 persons in all benefited from the ICRC's work in pursuance of its strictly humanitarian mandate. In this context, the organization obtained information about the whereabouts of 116 missing persons, 75 of whom were found alive. In addition, ICRC teams transferred the mortal remains of 60 missing persons to be handed over to their families or the authorities.

"We are trying to relieve the distress of persons suffering from the consequences of violence and to remind the parties to the conflict of their obligation to abide by humanitarian rules and not to involve the civilian population in clashes. Let us not forget that wars without limits are wars without end," said Harnisch.