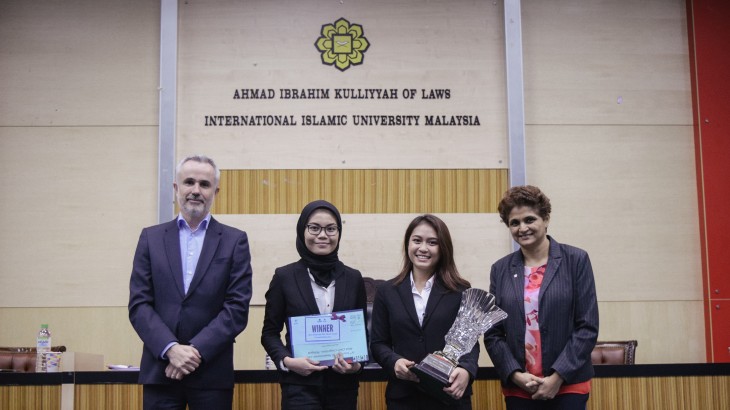 The team from Universiti Teknologi Mara (UiTM) lifted the winner's trophy at the IHL Moot Court Competition recently organized by the ICRC in partnership with the International Islamic University Malaysia (IIUM) in Kuala Lumpur, Malaysia. The competition, in its 14th edition now, allows students to argue prosecution and defence of a fictional war criminal charged before the International Criminal Court. The winning team will try its luck in a prestigious regional competition scheduled for March in Hong Kong.

Since 2004, the ICRC Kuala Lumpur has been organizing the competition in partnership with a local university. This year's event was held on 18 and 19 November at Ahmad Ibrahim Kulliyyah of Laws, IIUM, and it witnessed a fierce fight put up by law students of 10 public and private universities.

Isabelle Barras, head of the ICRC regional delegation in Kuala Lumpur, said the competition was one of the main activities organized by the ICRC to reach out to universities worldwide for the promotion of international humanitarian law (IHL). "We hope that competitions like these foster the understanding and relevance of humanitarian law in today's world. The idea is for the future leaders and decision makers to have a thorough knowledge of IHL's basic principles," she said.

Ms Barras said the event not only tested the skills of law students as future legal practitioners, but also provided them with a door to the humanitarian world. "By debating upon and researching the legal and humanitarian issues that exist in relation to armed conflict and other violence, students are exposed to a whole new experience in the IHL moot court where spirit of humanity is the central pillar," she added.

The engagement with academic community is instrumental for the ICRC since professors, lecturers, researchers and students play a significant role in fostering respect for and implementation of humanitarian law.