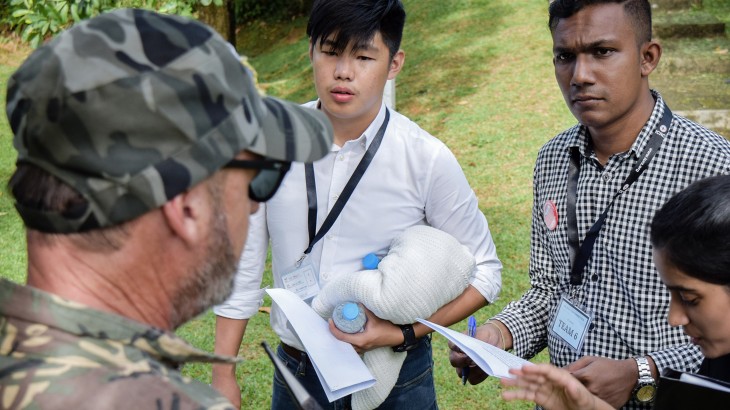 Participants have to deal with “tough soldiers” and negotiate their way through the military checkpoint. CC BY-NC-ND / ICRC / Lili Chin

For three days, 13 teams from eight universities tested their knowledge of international humanitarian law (IHL) in fictional armed conflict and other scenarios put together during the 3rd IHL Role Play Competition. Essaying various roles such as humanitarian workers, detainees, military, political leaders and lawyers, students tested their practical understanding of IHL, much beyond theories from textbooks.

As many as 40 students from eight universities, with their coaches and lecturers in tow, spent the weekend at the Law Faculty of the National University of Malaysia (UKM). The young law enthusiasts pitted their wits against each other, vying for a chance to win funding for their participation at the Jean-Pictet Competition next year in Macedonia. Co-organized by UKM and the International Committee of the Red Cross (ICRC), the competition was open to undergraduates and threw students into various scenarios emanating from an armed conflict between two fictional states.

Participants waded through “landmine-infested fields” in the rain, came face-to-face with actors playing prison guards, refugees, journalists and representatives of international organizations and had to compete for funds for their proposed development plans as the competition played on. After many intense rounds, the team from Advance Tertiary College (ATC) emerged victorious.

Isabelle Barras, head of the ICRC regional delegation in Kuala Lumpur, who also took part in the simulation in the quarter-final, semi-final and final rounds, was delighted to see that the competition continues to interest universities with a number of new private and public varsities participating this year.

I’m impressed by the students’ practical understanding of IHL, teamwork and quick thinking, which is essential in reality.

When asked about their experience, several semi-finalists nodded in agreement that the competition was very challenging, yet interesting. They all found it to be an eye-opening experience that broadened their horizon, promising to try similar other things next year too.

The competition was stiff and the finalists proved their mettle when they argued their cases before a panel of “ICJ judges”, played by experienced ICRC officers. In the final round of the competition, ATC’s Hemanathan a/l Perumal, Seah Eu Hen and Zoya Malik defeated one of the teams from UKM (Team B) comprising Ayuna Binti Yusoff, Hamsarartheni a/p Sivalingam and Kuhan Pillai a/l Anbalakan. Another team from UKM (Team A) with Amirah Nadirah bte Muhamad Nadzir, Ivan Ong and Izzat Amir bin Zulkefli as its members claimed the 3rd position. UKM (Team B) and University of Sultan Zainal Abidin (UniSZA) shared the award for best presenting team.

The winning team will be funded to participate in the Jean-Pictet Competition that is scheduled for March 2018.