Malaysia: IHL moot was a wonderful memory for me 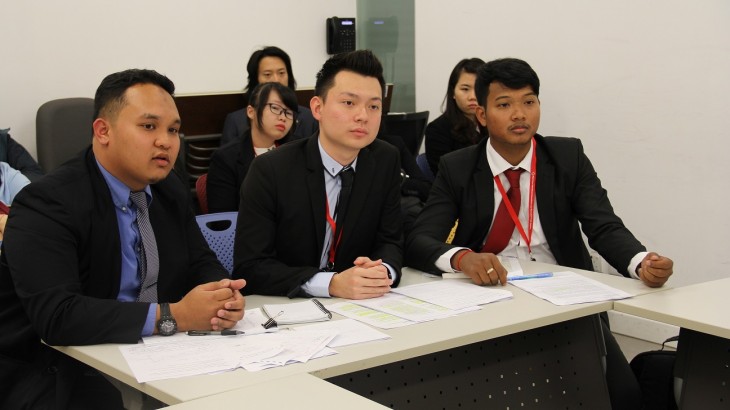 Gathering some 100 law students from 21 universities, the competition was a fiery test for the future law practitioners who vied for the top spots, challenging their knowledge of IHL and advocacy skills. One of the mooters, Edwin Lim, from Multimedia University (MMU) Malaysia, looks back on the wonderful memory of his participation in IHL moot court competition.

Please share your experience in the recent IHL regional moot court in Hong Kong. What will you always remember?

Apart from the competition itself, which was thrilling and exciting, the activities carried out by the HKRC and ICRC were equally adventurous. Those that will always stay in my mind are the IHL Role Play session as well as the stimulating "War Zone 90" IHL exploration activity. In both situations, we were compelled to immerse into the simulation so that we could enhance our understanding towards the scope of IHL and armed conflicts. What we experienced in these simulations were more than what we could have imagined through textbooks or blackletter law. Besides, the warm hospitality shown by the HKRC and ICRC would also form a significant part of my wonderful memory.

What did you learn from the IHL moot court competition?

Definitely be my better understanding towards IHL, why and how it is there, and who it concerns about. I have participated in IHL Moot since the first year of my legal studies in MMU, as a researcher for my senior mooters. The reasons that attracted me to join were that firstly, it was introduced as the 'law of war', which was something rather interesting for somebody like me, who had not heard of it. Secondly, it builds students' advocacy and research skills, which are part and parcel of a legal practitioner in real life. By taking part in IHL Moot, it has definitely satisfied my interest in the study of armed conflicts as well as helped to hone my skills as a future legal practitioner. Being the first mooting competition that I have ever joined, the IHL Moot is special for me in many ways!

The main difference is that IHL Moot tends to have a structure and format to it. There are usually 3 main issues (charges) within the Moot Problem and mooters have to additionally classify the nature of armed conflict, issues on jurisdiction and admissibility of case, reliability of evidence (international rounds). These are some of the cardinal elements which can be found and to be solved. With that, it gives mooters the much needed focus and precision as to where we should head on to. The Moot Problem is so well-drafted every year that a multitude of varieties are possible pertaining to the charges and it is virtually impossible to tell from the outset if the Prosecutor or Defendant would win. Therefore, mooters could concentrate on the substantive issues with depth to argue out the case more effectively.

The underlying principles of IHL are to respect life and human dignity. Did the learning of IHL change or influence you in any way? If so, please explain.

There's a Chinese saying of: '盗亦有道', which basically translates that: 'even a thief should only steal in an honorable way'. The same concept applies to the conducts of war. In real situation, mandating parties to conflict to abide by IHL may be a mountainous task, but, that does not mean that such law is redundant. Victims of war in most cases are ordinary innocent civilians and parties to conflict should never risk lives of those who are not taking part in the conflict for the sake of advancing their own motives or agenda. When war is inevitable, IHL is notably significant as a final safeguard to humanity. The underlying principles of IHL tell us that there must be a limit to everything, even in the times of battle where there is virtually loss of humanity.

What advice would you give to students who are interested to participate in the IHL moot court competition in the future?

Future mooters should advance their research into the existing database and sources of authority, and to prepare themselves better to face competition by doing more oral presentation and training often to prevent hiccups during tournament.

Just take up the challenge and be ready for the experience and exposure. And most of all, advocate the significance of IHL towards humanity!