Mali: "Despite my disability, I remain a whole person…" 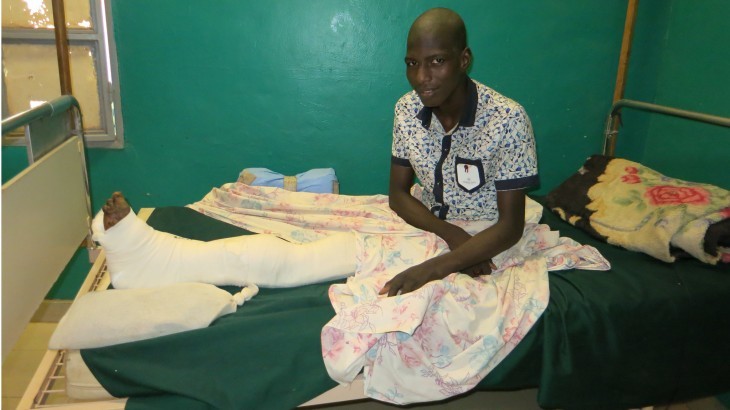 Despite the amputation of his right leg, Souleymane is determined to overcome the odds. CC-BY-NC-ND / CICR

Like other traders his age, 19-year-old Souleymane has sold his wares in several market fairs in the Gao region. In 2016, his life took a turn for the worse when he ended up with an amputated right leg and a broken left one due to a road accident . Here's his story of how he learnt to face his fears with a smile on his face.

On 9 October 2016, on the road to Gao from Batal, Souleymane met with an accident which changed the course of his life.

The vehicle he was in met with a serious accident, which left several dead and many injured. He was rushed to Gao hospital along with the other injured people. But once there, he refused treatment and decided to opt for traditional medicine instead.

A few days after the accident, Souleymane's condition didn't show any signs of improving.

Finally, his family decided to take him to a hospital. But it was too late. The surgical team, led by one of our physicians, gently shared the news with his family that Souleymane's right leg needed to be amputated.

For Souleymane, the diagnosis came as an absolute shock. For his family, an amputation was out of the question. He was left wondering how he would be perceived by his community and if he could even live with his disability.

In an effort to help him make the correct decision, mental health experts counselled Souleymane. After several sessions, he decided to go ahead with the amputation.

After the successful surgery, Souleymane undertook physiotherapy sessions at the hospital. He also participated in an extensive rehabilitation programme to help recover mobility.
After several difficult weeks, Souleymane is finally smiling."I am convinced that despite my disability I remain a person in my own right," he said. Once strong enough, he will receive a prosthesis to replace his amputated leg.

The ICRC comes across thousands of victims of armed conflicts and road-related accidents in Mali. Like in the case of Souleymane, they provide help whenever possible.

In 2016, our teams based in Gao, Timbuktu and Kidal regions, performed over 2,000 surgical interventions and over 1,000 one-on-one psychosocial visits.