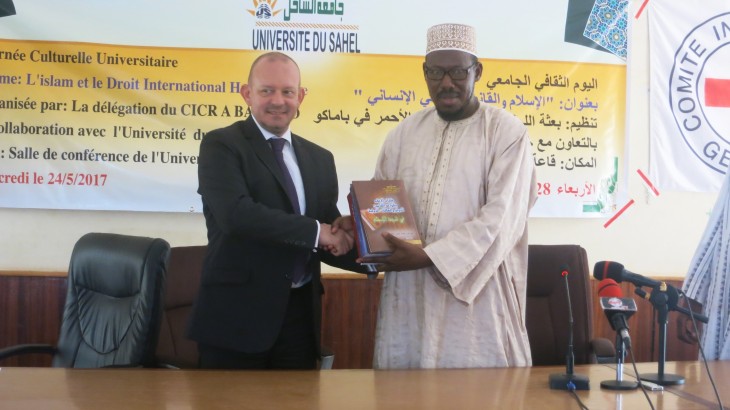 The ICRC mission consists not only to protect and support victims of conflicts and violence, but also to promote and broadcast the international humanitarian law. We organize different activities, including academic programs, to encourage education and research and pique the interest of the professors and students. We also encourage universities to offer courses on humanitarian law by providing technical support, which includes organizing training conferences.

Since 1996, the ICRC has been motivating and supporting the incorporation of the humanitarian law in secondary schools and university programs. This is done in order to promote respect in the future generation of decision makers and opinion leaders for humanitarian principles and rules which are pertinent in times of armed conflict.

The Université Privée du Sahel (UPS) is part of the universities that the ICRC endorses in the incorporation of the IHL. Created in 2012, that higher educational institution known as Université Islamique du Sahel (Islamic University of the Sahel) is divided into two faculties. While one focuses on Islamic studies and Arabic, the other inclined towards computer science. IHL figures in the curriculum of the Faculty of Islamic Studies and Arabic since the academic year of 2012-2013. Students enrolled in the Islamic Rights bachelor's program follow introduction courses on the subject for 8 hours of credit.

Moreover, since 2013, the ICRC has sponsored the participation of four UPS teachers in humanitarian law Arabic courses in Beyrouth and Tunis where the last edition was held April 2017.

Workshop with FAMas on practical implementation of IHL during arrest

The ICRC and Army General Staff (EMGA) jointly organized two thematic workshops on the application of international humanitarian law during arrest, from 25-28 April. These sessions were attended by forty officers and Non Commission Officers of the Malian Armed Force FAMa and two police officers.

Arrest falls within the competences of the Military Police (Military Judicial Police with the FAMas). Regardless, the army might have to arrest during hostilities, which can be an operational challenge. The participants exchanged information about the reality of some of the operational challenges they encounter. Attending these workshops also allowed them to refresh their minds on the basic rules of humanitarian law in general, especially those applicable during arrest. The presence of the police officers contributed to sharing experience on the procedures used by the Military Prespectolice.

In addition to the presentations made by the ICRC regional delegate to the armed forces and armed groups, the participants focused on practical exercises on hypothetical scenarios. This teaching method helped them to analyze critically and debate in a constructive manner on the existing doctrines and procedures.

In 2015, the ICRC and the EMGA had organised such workshops in the regions of Mopti, Gao and Timbuktu.