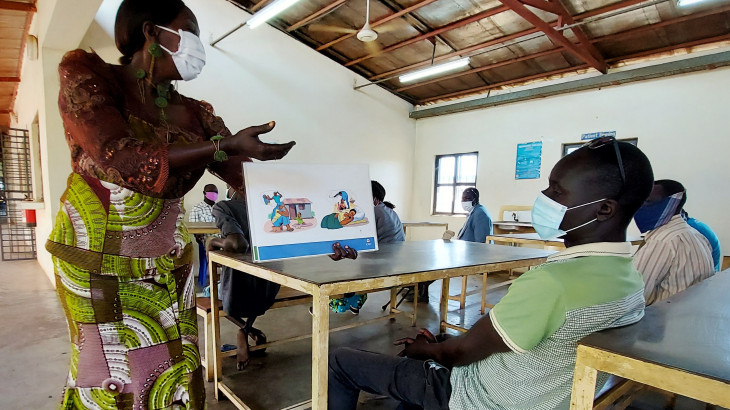 Juba (ICRC) – As October 10th marks World Mental Health Day, an untold number of people in South Sudan are struggling with depression, anxiety, and other mental health problems caused by conflict and violence and not receiving the support they need, especially in rural areas, either because services are not available or because of the taboo that often surrounds mental health needs prevent people to access care.

"Mental health is just as important as physical health and more needs to be done to ensure that people have access to the care they need, and that they don't face stigma for seeking help," said Fiona Allan, the mental health and psychosocial support manager for the International Committee of the Red Cross (ICRC) in South Sudan. "Far too many people suffer in silence for months, years, and even decades because of fear, shame, and misconceptions about mental health. We want people to know that mental health problems are common, especially after years of war, and it is ok to seek help no matter the cause of the mental distress."

In the more than 1,200 patients supported with Mental health and psychosocial support services seen by the ICRC in South Sudan this year, symptoms linked to depression and anxiety were the most common issues reported, an indication of what many in South Sudan may suffer from in silence despite them being common reactions to conflict and violence. Globally, according to the World Health Organization, more than one person in five in conflict-affected areas lives with some form of mental health problems, from mild depression and anxiety to post-traumatic stress disorder.

"In South Sudan, there are things that people fear to talk about," said Thimon Ozinga Ismail, ICRC's mental health and psychosocial support field officer in Juba. They fear that talking about mental issues can spoil the family history, the community or the clan history. They also fear that people will think they are wicked, mad, or that if they raise these issues, it would bring violence to their family."

The ICRC's mental health teams offer counselling sessions in Primary Health Care Centres, surgical wards and physical rehabilitation centres to look after patients physical and psychological health. They have also provided support to people who survived violence resulting from conflict or armed violence as well as victims of sexual violence.

Anthony Jobaze Atimanyo, a resident of Nimule in Eastern Equatoria State, lost his leg in an accident. "After my operation, I saw one of my legs was cut," he said. "I yelled, cried. I wish I had died. I felt useless, half human and not important any more. At one point in the hospital, I attempted to commit suicide with my own drugs. It took me more than one and half year to get healed in the hospital," Atimanyo said. "I went through lots of counselling to recover. My friends and family helped me in the healing process. It is normally very difficult to talk about how you feel when a dramatic event happens in your life. The inner wounds take longer to heal, the invisible scars remain big and painted in your mind, until you accept the situation. This is not an easy process."

How are you taking care of your mental health during #covid19? . . . #coronavirus #covid_19 #mentalhealth #mentalhealthmatters

Gattouk Gatnor suffered multiple fractures in his leg and was shot in the abdomen in the most recent outbreak of armed violence in Jonglei State. He was evacuated to an ICRC surgical ward in Akobo and later to Juba Military Hospital, where he tested positive for COVID-19.

"That was the highest peak of stress in my life," he said. I was scared that I could die, but after counselling and undergoing 14 days of isolation, I felt better and worried less.''

The ICRC is working closely with the Ministry of Health and the Ministry of Gender, Child and Social Welfare to expand mental health and psychosocial support services in South Sudan. This year, ICRC has trained 70 health care workers to be able to identify common mental health issues and provide basic psychological support and counselling so that such services can be integrated into overall patient care.

How to get support?